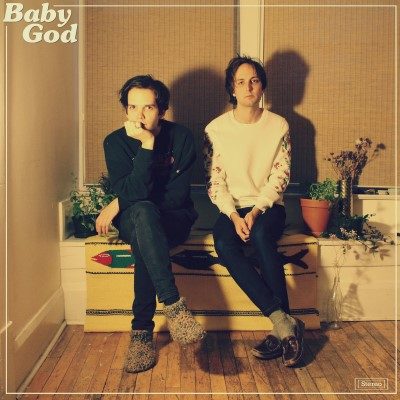 I decided to change up my listening preferences for this album. I put it on while I went about normal daily duties around the house. By the end of the album, I had completed more than I anticipated, as I was so into the album and not into the tasks I normally do.

The one word to describe Charlottetown, PEI based Baby God is talented. The two-man duo is made up of Nathan Gill & Andrew Murray. They released their debut self-titled album on December 22, 2017. Both members have been in numerous bands before forming Baby God, meaning the skills and talents they have learned from other bands were all put into this release.

Their music is something I can see being played at either a live pub or at a coffee shop. It’s the perfect kind of music to sit down, relax and simply have a good time listening to. It also makes you pay attention to it, as at the end of certain songs, they have something similar to a radio advert play that catches you off guard and draws you into the next song.

While the majority of songs on the album are mainly acoustic guitar, some tracks like “Meanwhile A.Y. Jackson” and “Days Behind” have a high-tempo beat, while adding drums and bass to the already aforementioned acoustic guitar, giving it a “Mumford and Sons” radio-friendly vibe. The overall tone of the album is very feel good. It’s a great album to introduce friends to as I feel like this style of music is a great listening choice for everyone.

As this is their debut album, I’m certain it’s all uphill for Baby God. I wish I had known about this album before 2017 ended as it would have definitely been placed on my favourite Canadian albums of 2017 list. This is an album that I could put on repeat and not even realize I had done so until at least the third playthrough. Simply put, it’s a really good album from a great new band.

If you have the time, check out this album, as you will not be disappointed. Big props to Gill & Murray for this album, I wish them nothing but success for the rest of their careers.