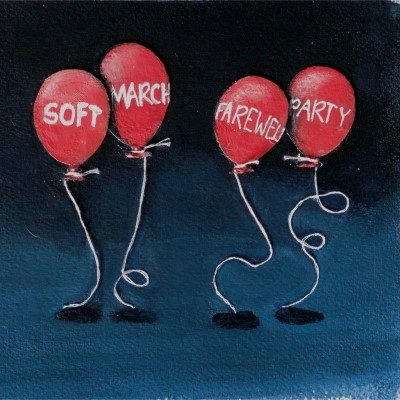 Soft March started as a songwriting partnership between Joel Kleine (bass) and Paul Jensen (Vocals, Guitar) in 2013. By 2016 they were performing together as a folk duo. It was only after the addition of Tanner Onciul (drums) at an open mic that Soft March was formed. To add the finishing touches, multi-instrumentalist Rachel Gleddie was added to the mix.

The band noted that this was a peculiar name for a debut album, explaining that it sums up the emotions found within Soft March’s songs. “These are happy songs about sad things,” says Kleine.  “A farewell party is that celebration of something changing, not necessarily good or welcome, but a way to deal with those changes.The songs focus on the sadness of departure, but are often delivered through upbeat, hook-laden tunes.”

The album begins with “Dragonfly”, a track that begins strong and quick with a noticeable folk influence. Rock influences can be heard throughout the guitar melody.

“Madeline” begins with a funky start. Compared to the other tracks, this one is more mellow and more soulful. It seems to tell the story of turmoil in a relationship and how one will try multiple things to fix the issues before ultimately admitting defeat. The addition of subtle background vocals adds a nice touch.

“Nowhere Else But Here” was an excellent addition to the album. Staying true to where they are from, Soft March penned an ode to Alberta. The lyrics seem to explain all the negative things that they have to deal with but in the end, there is no place like home. This song is described as being a singalong rock song (along with another track entitled ‘Ain’t Happy’). True to its description, I can see this being belted out by a crowd at a show.

The album ends with the title track “Farewell Party”, a song that (according to Soft March) is quiet and lonesome. It is a raw, emotional song that really tugs at your heartstrings. It simply consists of vocals and guitar, with the addition of an accordion to finish.

This album has something for everyone. According to Soft March’s description of the album, the usual folk-rock ingredients of vocals, guitar, bass and drums are sprinkled with violin, accordion and glockenspiel. Production of this album was fantastic. There was a rich arrangement, with all instruments complementing each other.

Overall, this album is definitely solid. They weave folk instruments and stylings into rock songs.  It is almost as if they took musical influences from different areas of Canadian music and made it their own. It reminds me of a mix of Blue Rodeo and the Barenaked Ladies. It is an album you need to check out. It is definitely not what you’d expected given its title.

Along with the release of their debut album, Soft March released a single entitled ‘The Friendly Beasts’ in December 2017. All proceeds from the sale of this track went to Edmonton’s Mosaic City, a not for profit-charity serving people challenged by poverty, hunger, addictions and homelessness. Another track, ‘Once in Royal David’s City’, was released in December 2016 saw the proceeds donated to Edmonton’s Mosaic City as well. Definitely a great way to share talent and raise funds for a worthy cause. Way to go!