Decimate Metalfest announces first round of bands for 2018 line-up 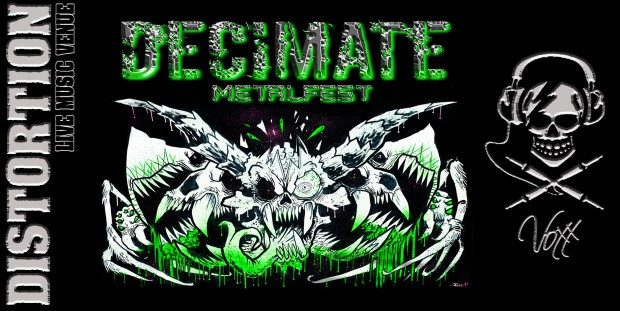 This June, the first ever Decimate Metalfest is hitting Calgary. The first wave of bands includes Chaos Being, Accostal, Hazzerd, Widow’s Peak, From The Wolves and Hammerdrone.

Calgary has always had a ton of local talent, spanning all various genres of metal. The first batch of bands has been announced and will be hitting Distortion Live Venue for a three-night festival; June 7-9th.

Chaos Being unleashed their presence onstage May 2016, and still have been going at it. Bringing technical riffs, aggressive drums this band will definitely have you hooked and headbanging.

Accostal has been at it hard since early 2016. Opening Calgary Metal Fest which had brought Canada’s big 4 thrash bands out, alongside other amazing artists. Mixing old school metal thrash and metalcore. This band won’t disappoint which the various vocal range and melodic hooks.

Widow’s Peak quotes “We are ruthlessly driven and passionate about our music and are driven by an insatiable hunger to succeed. Our unique approach to music and business, in general, is forged through a persistent work ethic, no small measure of risk-taking and a genuine “be yourself” attitude dedicated to becoming an unstoppable war machine. We pride ourselves on delivering an intense and fresh take on death metal that has been turning heads in our direction since day one.”. So they were, of course, a perfect fit for the first batch of bands for the festival.

For the rest of the bands to be announced head here. Ready to purchase tickets. Weekend passes available now.