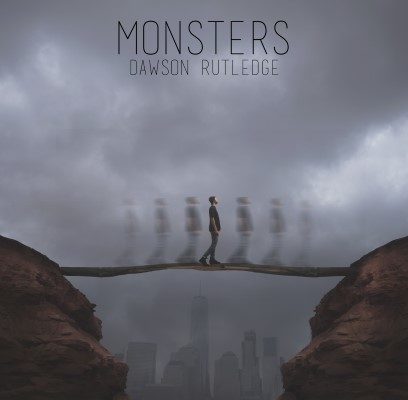 Hailing from Cranbrook, British Columbia, Dawson Rutledge is a young artist taking the music world by storm. The 20-year-old is “already something of a vet”, having written and recorded some original songs whilst in high school. His official debut album, Monsters is rhythmic and rustic, easily becoming a popular (musical) choice to help cure your winter blues.

Opening the album is “Thief of a Lover”. With its plucking guitar, rhythmic drums and Rutledge’s rustic vocals, the track evokes the folky sound of Mumford & Sons. Rutledge’s strong vocals harmonize effortlessly with female backing vocals, singing clever lyrics like: “You lost your tongue in the mouth of an icy stream”. Rutledge boasts the flow of a rapper, as well as the elasticity of a jazz singer.

“When Life Gives You Monsters” is a strong track, sporting a “subtle rhythmic groove”. The song’s heavy drumbeats harmonize perfectly with its strumming guitar. Not only does this track have smart and brutally honest lines like: “Our two-track minds have been tugging on each other/ It seems no good can come from staying desperate lovers”, but it also boasts stunning instrumentals. It’s dramatic and cinematic with a tense build up.

The album plays around with different moods as well. For example, “Whispering Winds” is a rather moody, and angsty track. It’s dramatic, almost circus-like with heavy, heavy drumbeats. Compare this to the following two tracks, “Same Old News” and “Yours, Truly”. As compared to their predecessor, these two songs are more upbeat and summery. Both boast the perfect marriage between guitar, piano and brass instruments.

Continuing the album’s theme of love and heartache is “Heavy Heart”. Staying true to its name, the gloomy track talks about an ill-fated love affair.  The album closes off with “Coffee Shop”. Although its melody is a cheerful one, the lyrics are rather melancholic. The track puts an end to the tumultuous emotions described by the previous songs. It offers closure and acceptance, ending the album on a bittersweet note: “Now it’s just me/ In comfort and in peace/ Knowing she’s happy without me”.

The late Carrie Fisher once said, “Take your broken heart, make it into heart”. It seems that Dawson Rutledge has done just that with Monsters. This solid debut album is relatable and dreamy. It’s no wonder that Rutledge has received so much praise for it already. I recommend that everyone grab a warm drink, snuggle up in some cosy blankets and listen to Monsters to soothe those winter blues. It’ll surely warm your heart, whether it be broken or not.