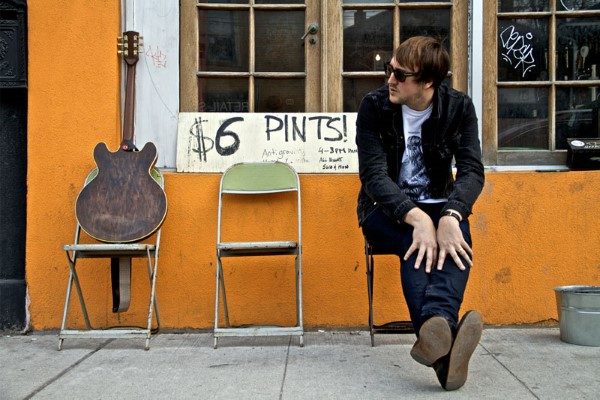 Mikey Manville may be best known as the frontman for The Manvils, but he’s holding his own and doing it with feeling on his solo release Nocturne Only. From personal tragedy within his family to extreme love for his cat, Mikey covers it all and has current fans listening even closer and new ones rushing in.

You’ve seen some great success as frontman of The Manvils; what pushed you to try your own solo project as well?

Originally, my solo songs directly led to The Manvils being formed back in Vancouver.  Some melodies, themes and tempo are just suited for a more individual approach in the studio, and I’ll set those aside, and when Producer John Akred comes callin’, I have a nice stash of tunes ready to go every couple years. These solo songs end up sounding far from bare bones and typically have even more tracks layered than a Manvils production, where we try to keep the feel of an honest electric three-piece. Continuing to have both projects on the go is the plan, and I’m grateful I can keep it rolling.

Your solo album, Nocturne Only, has a great “live-off-the-floor” feel throughout but doesn’t leave out the great production quality as well. Was this result your goal all along?

I’m happy you get that feel. That’s always what a great producer like John brings to the project. Live-off-the-floor tracking couldn’t be further from the truth. Every song started with one acoustic and a scratch vocal in a converted coleslaw factory attic in Chicago. Until John laid down a couple bass lines and we added drums, I was playing each track on my own, then vocals, adding acoustic and a bunch of electrics, pianos, keys and so on. It was the exact opposite way most records are made, and I really think it sounds sonically on its own island because of the alternate approach we took.

The album was written over the period of a few years, which gives great depth in terms of different experiences and, in turn, moods. Do you prefer this process over in and out, done & done in a shorter period of time?

Yeah, great question.  I can safely say it will never take me this long to record another album. In the process of recording, the studio we record the majority of the songs burnt down in a fire. John’s dog, Mango was saved and the master tapes as well. Quite a bit of vintage gear was lost.  The studio moved around a few times over a couple years, settling in Redwood City, CA. We finished the mixes in the sun years later. Happy days.

The video for “Bloodthirsty” has a great range of visuals and emotions from deep & dark to soft & light. Where was the concept, including you in “Devil” prosthetics, born from?

You could say that although the tones are warm throughout the album, the tunes have a fall/winter feel. Cool and dark at times, and the devil was just a character that came to mind when thinking about Bloodthirsty.  I couldn’t think of a more fitting mascot than the devil himself for this track and album. It was also a great challenge and a ton of fun to get fully decked out in Satan prosthetics & shoot with the Zedped and Gore & Glam crew up in Temagami.

I read names like Johnny Cash, Steve Earle and the late Tom Petty in terms of some musical influences, but was there anyone in your personal life that pushed you on this musical path?

I have an amazingly dedicated wife, band, producer and family that keeps me grounded. The great musicians of our time were the foundations of my formative songwriting years. Family ties are far more connecting to me.  I feel my confidence in songwriting only strengthens when I write from experience and focus on connecting my memory of the past and present to melody and song.

Focus for early 2018 will be to finish up the Manvils LP, Reaction Arrow. The final masters are nearly done and I am so happy with the songwriting and sonics we’ve captured. In late 2018 we begin mixing the next solo album, ‘Fieldnotes’  which John and I just finished recording in Redwood City this past year.

Some more shows should also keep us busy too…