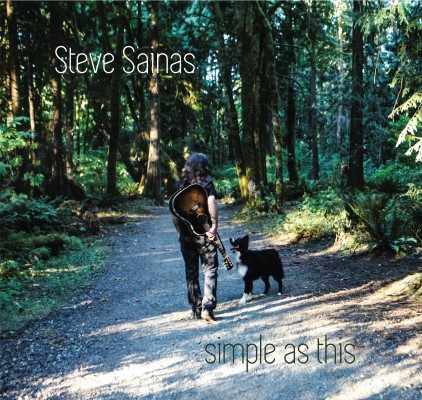 Following a successful career leading Canadian blues-rock band Mud Dog, guitarist and vocalist Steve Sainas has released Simple As This.  As his first solo record, Simple As This serves as a stripped back and acoustic take that seamlessly brings a sense of the blues to the singer-songwriter genre.

Simple As This opens with its title track; a song that is led by a rhythmic and warm acoustic guitar and Sainas’ soft and equally warm vocals and sounds as if it could be prominently featured in a romantic drama film.  The song is a direct take on the modern singer-songwriter genre – and while it features little obvious elements of the blues- if feels revitalising to the style among Sainas’ ever-growing peer group of acoustic folk musicians.  The second track, however, spices things up with a song that sits as the perfect synthesis between the style of the last song and elements of jazz and the blues. “Got Your Love” stands as one of the strongest songs, not only on the album but one of the best singer-songwriter tracks I’ve heard in quite some time.  It is as much Ray LaMontagne as it is Duke Ellington which makes it among some of the most exciting and interesting material to emerge from the singer-songwriter style.

While the previously discussed songs were featured a solo Sainas on vocals and drums, much of the following songs incorporate a full band, giving Simple As This a much bigger sound.  This in itself on songs like “Ruby Jo” and “Cities On Fire”- adds a unique dimension to the style.  Most notable though is his near eight-minute epic, “Rise Above”, that feels to the blues-rock of The Rolling Stones on “Gimme Shelter” and Creedence Clearwater Revival.  Despite its length, the song is beyond exciting and immediately pulls the listener in and- just like “Got Your Love”- is among the best there is on Simple As This.  “Rise Above” is furthermore a clear example of how Sainas is able to stretch the creative boundaries of multiple styles all on one record.

Over the course of ten songs, Sainas’ delivers an incredible solo debut record that stretches the possibilities for both a bluesman and a singer-songwriter.  Without a doubt, this is a must hear record from an acclaimed artist who challenges your expectations- not only for him- but for the singer-songwriter style as well.