Home / Editorials / 12 Emerging Canadian Artists to Watch for in 2018

12 Emerging Canadian Artists to Watch for in 2018 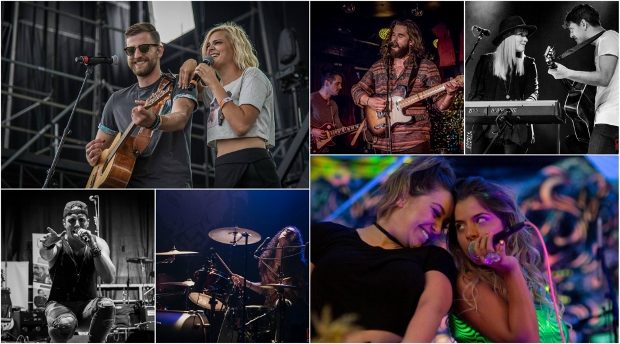 A new year means new artists to discover and love!  We are blessed to have a flourishing Canadian music scene thanks, in part, to the massive number of emerging artists working tirelessly to get their music out, whether it be as an independent or recently signed artist.  The team at Canadian Beats sat down again to select 12 worthy Canadian emerging artists who we think will be movers and shakers in 2018.  Get to know these artists all at once, or choose one a month!  Follow them on their socials, listen to their music and check out if they have an upcoming show near you.  Don’t forget to let them know what Canadian Beats recommended them to you!

The emerging artist(s) that received the most votes from our team was this hard-rocking duo from Toronto.  Their unique rock sound, which fuses classic psych-rock with blues and modern rock has caught the attention of many, including the fine folks at 97.7 HTZ FM, who awarded them as winners of the 2017 Rock Search.  They also recently finished up a tour with Canadian rock powerhouse, One Bad Son.  Their most recent EP, Rise Over Run is gaining the attention of local radio stations but what sets this band apart is their live show.

The Monowhales (formerly Ginger Ale & The Monowhales) who are one of Toronto’s most recognizable live acts, have garnered the attention of media influencer Alan Cross, and have had massive success streaming on Spotify.  2017 proved successful for their rebranding and we love their fresh new look!  Recent show highlights include performing in the Ontario 150 ONtour summer concert series in Guelph with Coleman Hell and Headstones, and in November, Monowhales co-headlined a tour with Featurette.

We think that this country rock singer from Montreal has all the necessary ingredients to become Canada’s next female powerhouse!  Her powerful lyrics advocate women’s rights and there is no question why her latest album, Here We Are (October, 2017) debuted as #23 on the iTunes Country Charts among artists like Miranda Lambert and Shania Twain.  Regarde le monde… voici Andie Duquette!

Eric Ethridge has redefined the boundaries for an independent artist, proving that a musician’s brand can be cultivated with a whole lot of hard work and creativity!  This winner of the 2016 CCMA Discovery Award successfully launched two singles last year.  “Liquor’s Callin’ the Shots” peaked at #30 on the Canadian Country Charts when it debuted in March, and we love his latest single “Makin’ Me Crazy” which was released in October. Having already shared the stage with superstars like Brett Kissel, Florida Georgia Line and Thomas Rhett, we can only presume 2018 will be one for the record books!

We love the innovative approach that Toronto-based hard rockers, Uforia, is taking to gain recognition in today’s music scene.  Their single, “Fight or Flight” is receiving regular rotation at many professional sporting events including games for the Toronto Blue Jays, Edmonton Oilers, New Jersey Devils and Ottawa Senators.  It was even played at the NHL 100 Classic Game between the Senators and Montreal Canadiens in front of 34 000 people!  You can catch Uforia on stage in January as they open for Kim Mitchell in Brampton!

Representing Cape Breton is the ‘Nashville meets East Coast’ stylings of Port Cities.  They are no longer a well-kept secret in the Maritimes!  They recently were the winners of FIVE Nova Scotia Music Awards and are set to embark on some shows in the UK in March.  We can’t wait to see where 2018 takes this ambitious and talented band.

What Canadian band doesn’t dream about the opportunity to tour alongside a band like Hedley?  This will be a reality for this Halifax trio in February, but after they headline their own American tour in January!  Ambitious and talented only begins to describe Neon Dreams, who were also the winners of the 2016 Allan Slaight JUNO Master Class Program.  Get ready for their back-to-back tours by checking out their latest EP, Wolf, Princess & Me, which was released in September.

It is no secret that we LOVE the ladies of Calgary country band, Nice Horse!  From the first time we heard their debut full-length album, There Goes The Neighbourhood, which includes the popular single “Pony Up”, we were hooked!  Nice Horse ticked off a huge bucket list item in 2017 when they performed at Boots and Hearts and already have many dates announced for 2018 including Big Valley Jamboree in Camrose and Stars & Thunder in Timmins.

Not just anyone can pull off a long-haired, barefoot performance on stage, but the gentlemen of Band of Rascals are on the way to making it iconic.  We’ve said it before and we will say it again, this is a band that must be experienced live!  With recent performances in Toronto and at Ottawa’s JUNO Fest, they are building a name across the country!  Stay tuned for more tour announcements in 2018 and check out their new EP, Tempest, which was recorded at Bryan Adams’ studio, The Warehouse, under producer Eric Ratz (Billy Talent, Arkells, Monster Truck).

Those vocals!  That on stage chemistry!  The buzz about this country duo from Calgary building and we expect to see Leaving Thomas break out into the international music scene in a big way this year.  After joining the MDM Recordings Inc. roster in 2016, Leaving Thomas has spent their time creating music and touring, including a stop at Boots and Hearts in 2017.  Fans can expect to see them at Big Valley Jamboree in Camrose and Manitoulin Country Fest in Little Current in the upcoming festival season, among other many upcoming show announcements.

Since her EP Launch Party at the Drake Hotel back in March, 2017, Ralph has added some pretty impressive notches to her belt, including sharing the stage with Charlotte Cardin, the Darcys and performances at Rifflandia 10 and the CBC Music Festival.  Ralph is also celebrating her successes internationally by recently announcing over 1 million Spotify fans in 61 countries.

If this is not a country music success story in the making, we don’t know what is!  Five farming, brothers from Shaunavon, Saskatchewan, with roots in hockey, have performed together since childhood singing gospel.  They then go viral with two parodies, “The Combine Got Stuck” and “The Tractor Got Stuck” (based off of the Corb Lund song, “Truck Got Stuck”).  Oh, and they have an incredibly stunning album out too, Getaway, featuring their newest single “Born and Raised”.  The Hunter Brothers spent 2017 gathering steam as they did the festival circuit and are set to perform this year at more festival dates including Country Thunder in Calgary.

We hope you have enjoyed our list of 12 emerging Canadian artists to watch in 2018.  All of our nominees made their start in small venues across this great country.  Make 2018 the year to get out and support local live music.  Explore the venues in your town and you might just stumble upon the next big star!