With a stellar lineup of Indigenous and non-Indigenous musicians and writers, the final stop of the New Constellations tour was a night to remember. New Constellations is a nation(s)wide tour curated and produced by The Basement Revue and Revolutions Per Minute. It not only includes a 13-stop tour, but a mentorship program and workshop series for Indigenous youth, digital curriculum, and a tour documentary.

Collaboration, inclusivity, and support were key themes throughout the show—which spanned almost four hours and included a brief intermission. The intimate bonds between tour members was evidenced by the multiple collaborations between different artists and an ongoing joke about people becoming pregnant on tour. Artists waiting to perform stood eagerly on the sides of the stage, listening with rapture. Extra care and attention was put into making everyone feel welcome and safe.

Leanne Betasamosake Simpson began the evening by acknowledging the traditional territory of Indigenous people who inhabited the land we currently occupy. Co-producers of the festival, Jason Collett, Damian Rogers, and Jarrett Martineau, acted as the evening’s hosts by taking turns introducing artists. Jason Collett was first to perform and was accompanied by Feist on drums and Peter Dreimanis on piano. This was the first of many collaborations throughout the night.

Safia Nolin, a musician from Quebec City, who had recently returned from a tour in France, sang songs in French mostly about being depressed. She prefaced her song by telling a funny story about losing her neighbour’s dog while running down a mountain, afraid it would get dark soon, and dislocating her knee in the process. It was the perfect blend of melancholic humour. 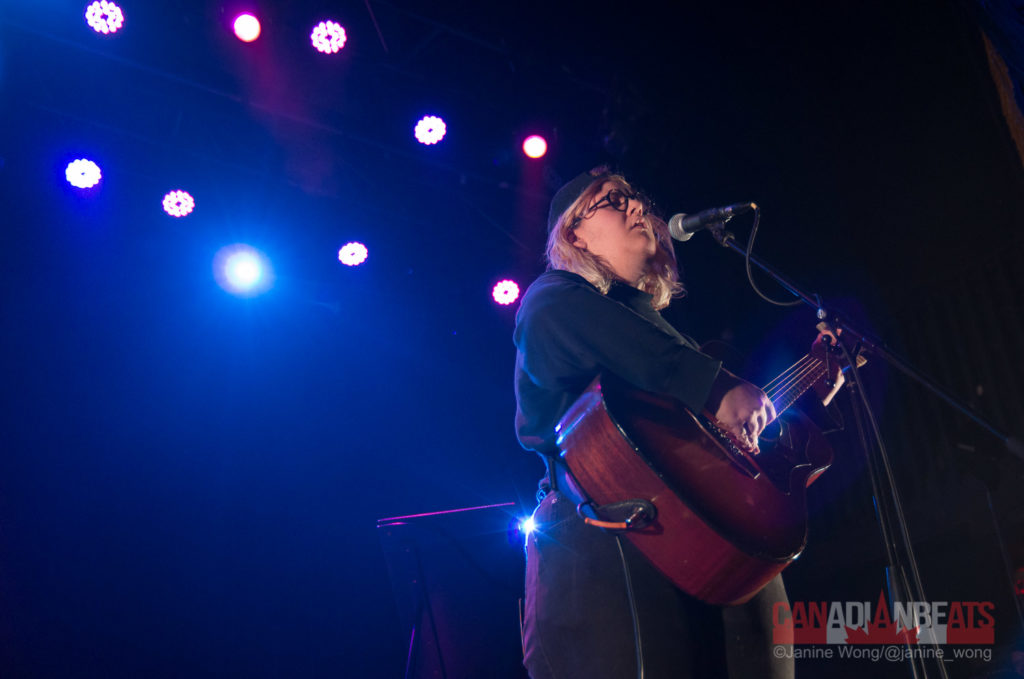 Next up was David Chariandy, a writer from Scarborough, who read an excerpt from his most recent fictional novel, Brother. The book revolves around two brothers growing up in Scarborough with their hard-working, immigrant mother. Chariandy told relatable stories of what it was like to come of age and struggle financially and as a minority.

Quietly taking his place behind the piano, Jeremy Dutcher astonished everyone with his dramatic and beautiful voice. Dutcher explained how one of the recordings accompanying his performance was taken from his ancestor over one hundred years ago. Dutcher talked about the importance of keeping traditional folk music alive as only one out of 100 traditional songs has survived through time. At the end of his performance, he stuck his head into the grand piano, sang directly into it, and left the audience in absolute awe. 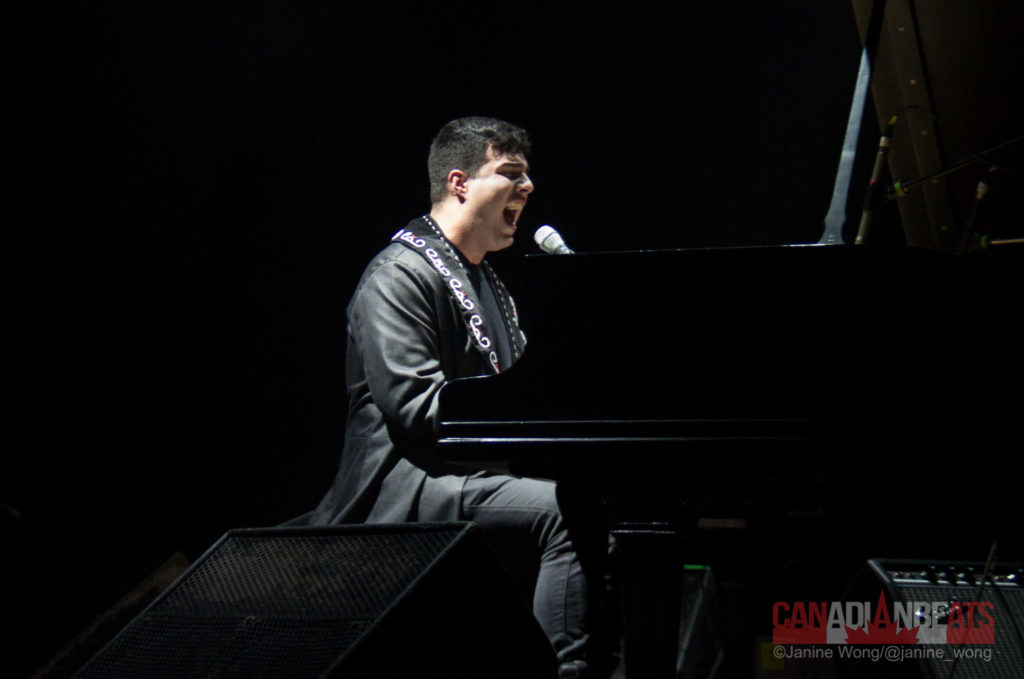 Quebec-born Inuit singer, Elisapie was up next, accompanied by a guitarist and Dutcher on drums. Elisapie coolly moved around stage with her haunting songs and impressive throat singing, admitting that she might be the rumoured pregnant woman on tour. 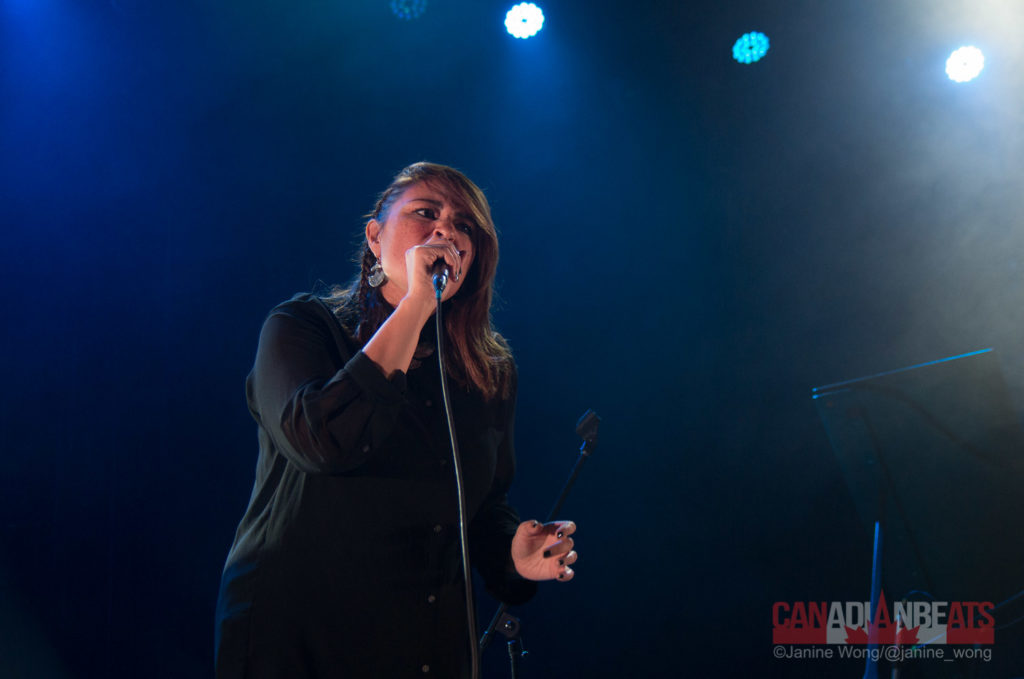 Feist performed a solo set and expressed her admiration and gratitude to share the stage with such inspiring artists. She performed “Century” and “Baby Be Simple” off of her latest album Pleasure using a loop pedal. Her last song was a cover of Gord Downie’s song “The Stranger” from The Secret Path—which chronicles the story of Chanie Wenjack, a 12 year-old boy who escaped from residential school and tried to make his way back home. 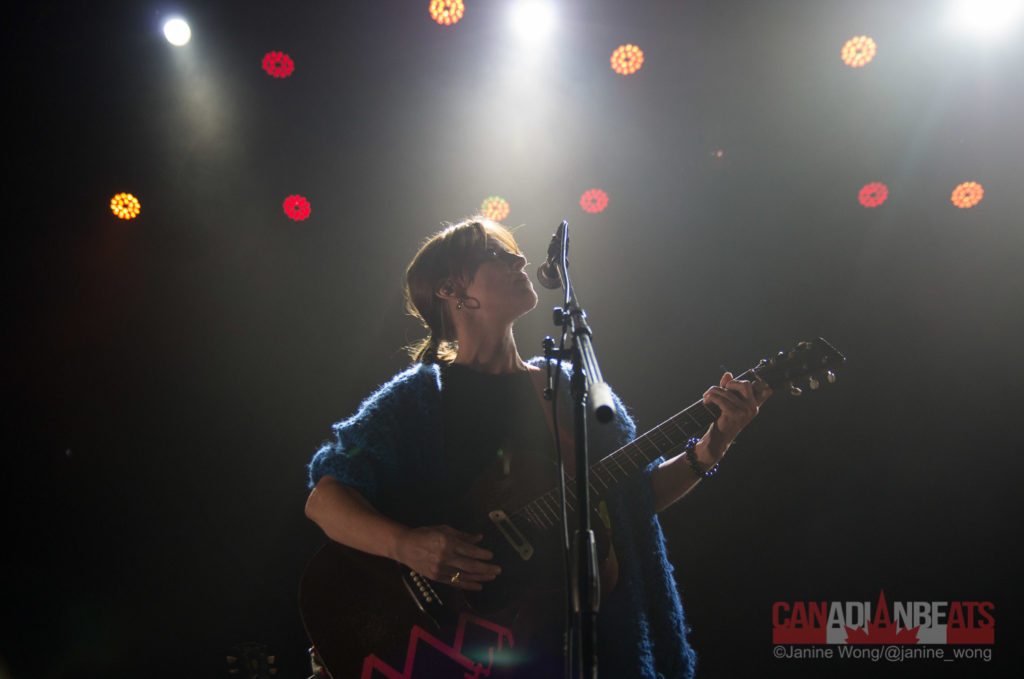 New Constellations co-founder Damian Rogers, shared a poem that was about her mother’s dementia and receiving a box of letters she and her mother had written to her absent father.

Leanne Betasamosake Simpson is an acclaimed Michi Saagiig Nishnaabeg writer, poet, and musician bringing together spoken word with song. With a full band backed by Dutcher (again) on drums, she dedicated a song to all missing and murdered Indigenous women. 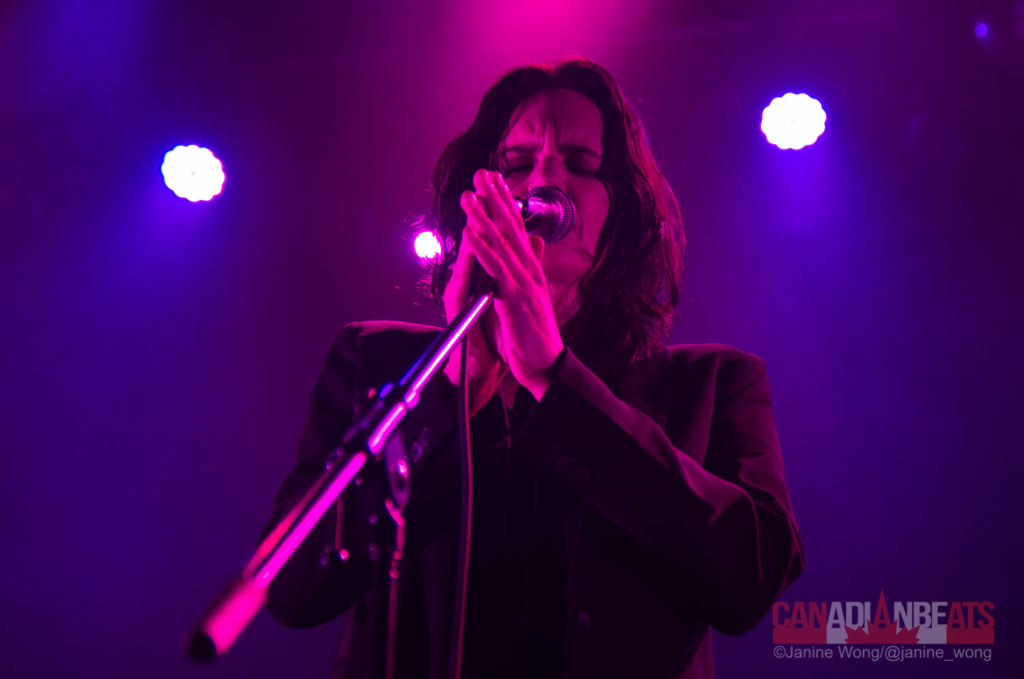 While not originally scheduled to perform for the last stop of the tour, Peter Dreimanis and Leah Fay from July Talk couldn’t resist coming back for a surprise performance. With Dreimanis on the piano and Fay up front on vocals, they covered a song by Emily Haines. Fay got up close and personal by walking into the audience and singing directly to the crowd. 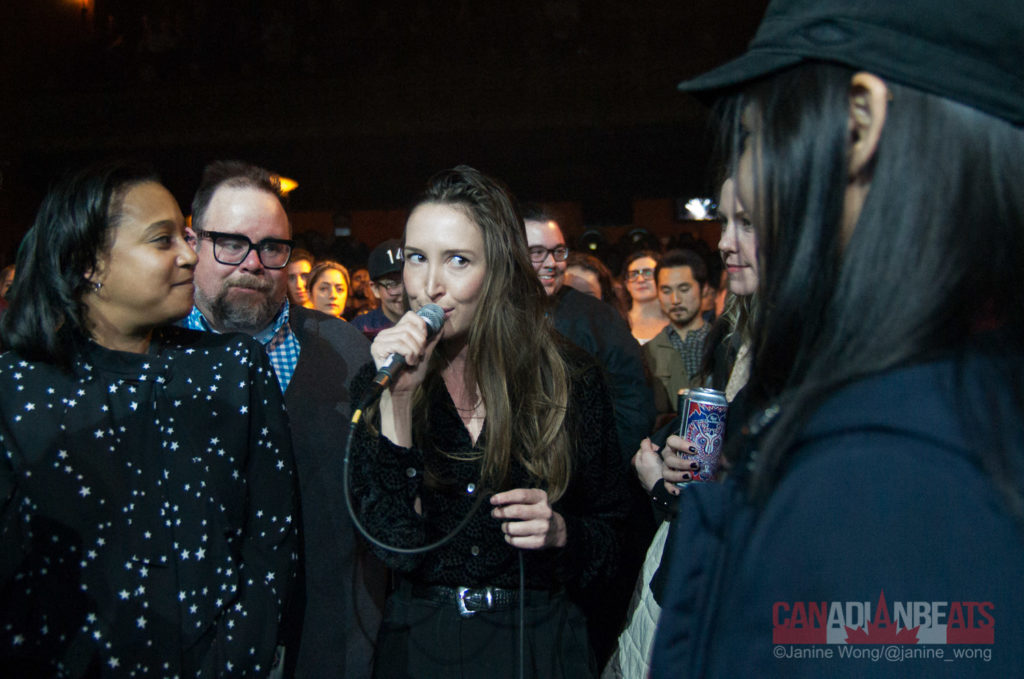 Journalist Desmond Cole told an impassioned story about a (possible but seemingly improbable) connection he had with a woman in Halifax he was interviewing. She happened to come from the same town in Sierra Leone and share the same last name as his relatives. Tracing back his history and the ancestry of other Black Canadians living in Nova Scotia, he saw how he and this woman, from two disparate parts of Canada, could have originally come from the same city in Sierra Leone.

Lido Pimienta is an absolute powerhouse. Her energetic, strong, and colourful personality shine through her songs and stage performance. Singing mostly in Spanish, she explained that her song “La Capacidad” was about coming out of an abusive relationship with an ex-boyfriend who tried to blackmail her by releasing with naked photos online. She ended up calling her mother to help solve this fiasco. Her mother brilliantly called up the ex-boyfriend and told him to leak the photos because she thought Lido’s naked photos would make her rich and famous. 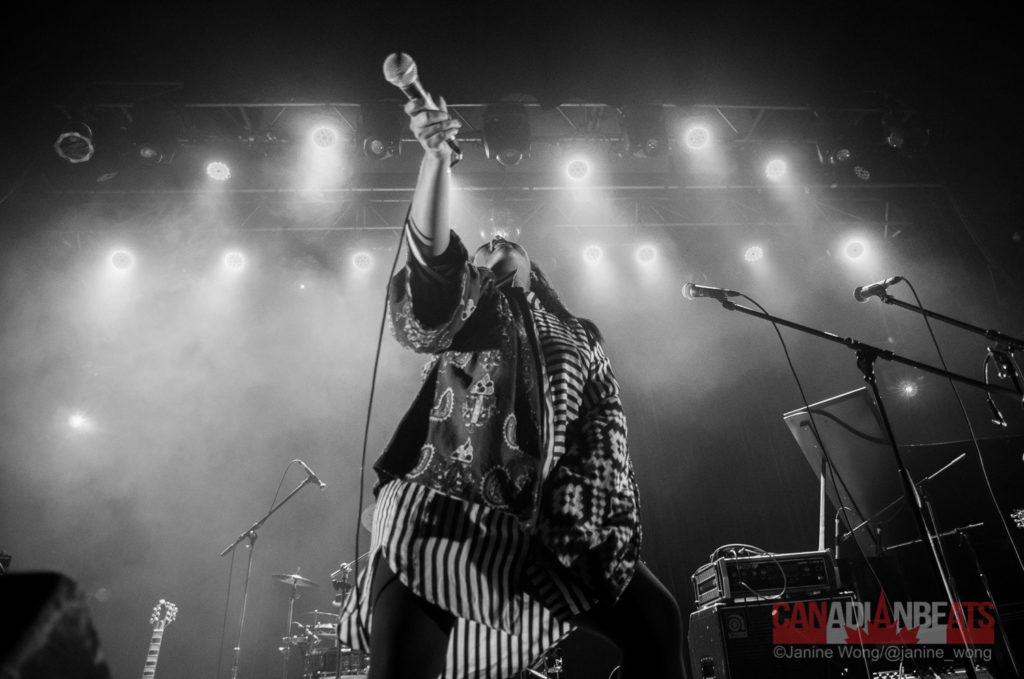 Ending off the night was Toronto-band, Weaves. Singer Jasmyn Burke talked about what it’s like to be the only woman of colour in an otherwise all white male rock band. She went on to talk about not having a commercial look, finding her place, and knowing that there’s room for everyone to be themselves before launching into “Scream”. 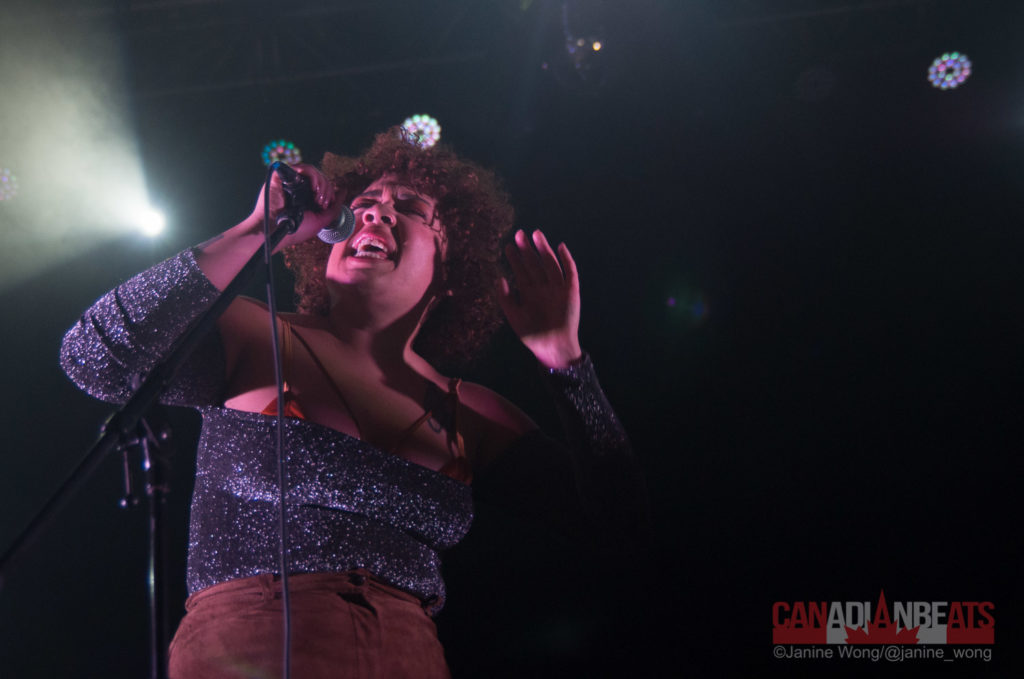 The intimacy of the performances and calibre of the artists made this one of the best shows of the year.