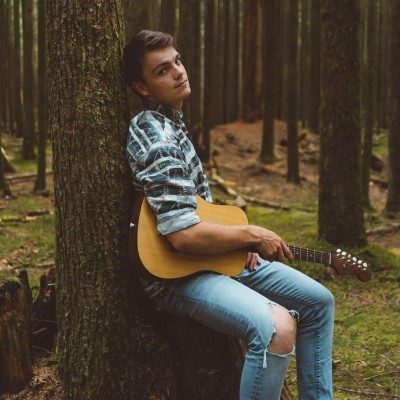 We had a chat with emerging Halifax based folk/rock artist, Braden Lam for our newest segment of Five Questions With. Braden released his new single, “Into The Light” on December 15, 2017 along with an accompanying music video, which you can see below. Enjoy!

My full name is Braden Lamoureux, I am a folk/rock musician and songwriter hailing from Halifax, Nova Scotia. I grew up in Uxbridge, Ontario but relocated to the East coast in 2016 after the release of my self-produced debut EP “The Coast”. In just over a year of living in Halifax, I have been featured on radio stations across Canada, played some of the city’s most popular music venues, and even host an open mic where I attend school at Dalhousie University. I recently released my highly anticipated new single “Into the Light”, which is the first from a new EP expected to be released early next year.

I only started writing music about 5 years ago so I’m always challenging myself to be constantly learning and improving the process. From the start I was never huge on artists or albums where every song sounded the same, so I really try to target different sounds and styles for each song I write. I also grew up singing in church a lot, so those very singable and simple melodies definitely diffuse into my songwriting. I like to write a mix of upbeat songs that get people singing along at a live show, and also slower more acoustic songs.

When writing, my number one approach is to be as honest as possible. I really believe that if you make yourself vulnerable in your art, that is when people will want to go back and hear it again. Music listeners want to feel something. So currently, I tend to write about personal experiences and feelings, or about the traveling I have done across Canada in the past couple years. My favourite part about songwriting is that there are no rules, there’s no right or wrong, it’s just a constant competition between the latest version of a song you’ve written, and whether you can improve on it or not.

I am currently in Ontario for the holidays and I am playing a couple hometown shows:

My live shows tend to be very upbeat and I like to bring the audience on a bit of a journey. I play solo acoustic and full band shows, depending on the venue. I love getting the audience engaged whether that’s singing along, joining us onstage for a tambourine solo, or shedding a tear or two.

My new single “Into the Light” released on November 24th will give listeners a taste of what to expect from my next EP. Check out the music video above.

I’m going to say, Hey Rosetta! first, because I recently saw them play during their farewell tour through Toronto, I really appreciate the space and instrumentation they put into their songs. After moving out East I listened to Joel Plaskett non-stop, just love his lyrics and catchy melodies that grab you. Dallas Green as well is a huge inspiration for me in channelling emotion into music. To name some others I would say Jon Bryant, Donovan Woods, Said the Whale, July Talk, Wintersleep, The Rural Alberta Advantage, Great Lake Swimmers, the list goes on and on.