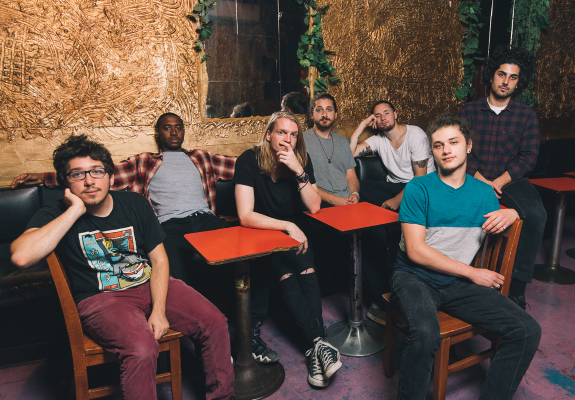 The Pick Brothers Band are revved and ready to take on The Mod Club on December 22, 2017. Having expanded from a trio to a seven-piece, these musicians are ready to wow audiences with their big sound and bright energy. Playing with Lost Cousins and Midnight Vista, it is sure to be a night packed with feel-good tunes and vibes. Recently returning from their tour with Birds of Bellwoods, The Pick Brothers Band are ready to rock their hometown of Toronto. Their intricate performances and astounding stage presence is sure to make this night at The Mod Club one for the books! We got a chance to talk to Jeremiah Pick about their music.

To catch a glimpse of what’s in store for tonight, check out their tour recap video with Birds of Bellwoods here.

We chatted with The Pick Brothers Band before their Mod Club show – and had a chance to ask them all about their experiences and memories as a band. Check out what they had to say!

How did The Pick Brothers Band come to be?

A bunch of years ago, Gabriel ended up on bedrest at Southlake hospital for an extended period of time. Whilst cooped up there, he turned out a bunch of songs that were inspired by his situation. Casey and I (Jeremiah) thought there were some gems in the pile of stuff that he was making and I suggested that we work on some of the music when he got released. We started playing when he got better and the band has been snowballing since then.

The expansion of your band from a three piece to a seven piece is quite the change. What made you decide to expand and how have the dynamics within the band changed?

We loved playing as a trio but always wanted to hear more sounds than we were able to create between the three of us. It felt inevitable that we’d bring other people into the band but we wanted to find new players in an organic way. So it took a little longer than it might’ve if we’d just gone out looking for session players, but we’ve ended up stumbling upon a group of people who we love and admire. Each of the guys brings great energy and ideas, and sometimes decent jokes as well.

Being around in one of the best, but hardest times for the Toronto music scene – what do you do to keep yourselves motivated?

Touring and recording are definitely things that give us a lot of energy and focus. When we’re not doing either of those things, though, the desire to keep moving forward creatively keeps us coming back every day. Whether it’s working on new music or practicing our instruments or dreaming up ideas for visuals, all of that stuff has a lot of intrinsic energy.

What is it, in your opinion, that makes you stand out in the local scene? What is The Pick Brothers Bands’ “X” factor?

We put a lot of love and effort into the music that we make and I think when people pick up on that they end up feeling some kind of connection with what we do. We also try to do things our own way and so I think our music has ended up being a unique concoction that doesn’t really sound too much like anything else.

Where do you pull inspiration from? How do you write/ compose your songs?

Inspiration can come from anywhere. I think it’s kind of just about needing to express what’s inside of you at a certain point in your life. Gabe and I are the main songwriters in the band and for both of us, songs come from just playing around with one instrument or another and exploring ideas. Sometimes you land on something that feels like a discovery, and then you just sort of pursue it until you’ve uncovered as much of what’s there as you can.

Having opened for big names like Arkells and Houndmouth, how did you prepare for those experience? How were those performances different from playing your own shows? (Or were they?)

We like to treat those shows the same as any others. We try to really make sure we have our thing tight to a tee and that we’re playing the best set we can be every time.

Those shows are a little different than our own billings though because we’re often playing to a lot of people who’ve never heard us before. That’s always exciting and kind of refreshing… When you play a song you’ve played a hundred times for a new audience, it can almost feel like you’re hearing it for the first time yourself.

Are there any musicians you dream to open for/ play with?

Tons! There are so many great musicians and songwriters on the scene these days and it’s always a special thing to get to cross paths with a new one, whether it’s sharing a stage or living room jam or something. To pick a few though, maybe D’Angelo, Vulfpeck, Daniel Caesar, Tame Impala.

Having just released you tour recap video, what would you say was the best part about touring? Any funny stories you’re willing to share?

Every day is an adventure on tour and that’s really the best thing about it. Also playing to new and stoked crowds is great, of course.

Most of our good tour stories are better told to in person, but one kinda funny thing happened this past October… We were playing at Hunter’s Ale House in Charlottetown on a Thursday and were heading to Halifax the next day for the weekend. We had a morning TV interview to do while we were in Halifax but we were all under the impression that it was on the Saturday morning. When we got off stage at Hunter’s at about 2 am one of us glanced at emails and, by chance, realized the interview was, in fact, the next morning with a 7 am arrival time. The drive from Charlottetown to Halifax is about 4 and half hours so we had to change our plans pretty quick, pack our gear and drive all night. We got to the Global studio in time to nap for about 20 minutes before we did the interview live on air. It went pretty well though!

What is your favourite part of being in a band?

Being in a band affords us a lot of unique and amazing experiences. Playing to big groups of people, travelling to far away places and spending long days and nights in beautiful recording studios are all pretty great payoffs for the work we put in. At the end of the day, though, getting to make music every day with the people we love is what it’s all about.

Any advice or words of wisdom for up and coming local musicians?

I think the real key things are to love what you’re doing, to do it as well as you can, and to hang out with people who inspire you to go further than you might’ve gone on your own