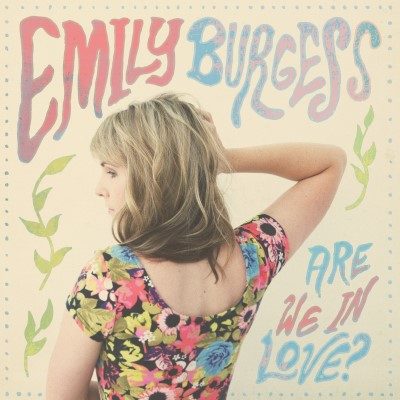 Since bursting onto Canada’s vibrant blues and rock scene with her involvement with the Juno nominated 24th Street Wailers and years of tirelessly touring across North America, guitarist, singer, and songwriter Emily Burgess has released her debut solo record, Are We In Love?.  The full-length record from the Toronto based artist captures a modern blues sound that feels innovative while nostalgic to past influences, making it a strong contender for one of the best records from an unsigned Canadian artist this year!

Opening with the crunching of an electric guitar that sounds to be pulled straight from The Rolling Stones Songbook, “Til I Get To Call You My Own” is a straight-up blues rocker that immediately expresses the hype surrounding Burgess. The song, despite her smooth and sweet vocals, is driven by a heavy shuffle and coloured by a soft piano, rich vocal harmonies, and a string of lead lines from the electric guitar and carries a confidence that pairs well with such larges blues sound.  The following track, “I’m Gonna Make You Mine”, pursues the psychedelia of the 1960’s in a tone reminiscent of Donovan yet sounds indescribably modern.  While much of the songwriting and instrumental tones- especially the eclectic range of lush guitar tones- Burgess’ voice feels fresh as it resonates between modern pop and rock.  It is this push and pull between present and past that makes Are We In Love? such an interesting blues album and what separates Burgess from much of her cohort.

Burgess shines not only as a vocalist, however, but also as a guitarist.  From her 50’s style solo on “All I Wanna Do Is Love You” to her rhythmic riffing on “Arrested”, Are We In Love? seamlessly and subtly is as much of a guitar album as it is a love letter.  Much of this rests in the raunchy solos and weaving lead lines that creep their way in between the pop-inspired melodies and progressions, making for a much deeper and exciting album that, once again, separates Burgess from the countless singer-songwriters by giving her a second voice that takes the form of intricate and compelling guitar parts that pay homage to the blues of the 60’s and 70’s, along with modern artists of the likes of John Mayer.

Over the course of its ten tracks, Are We In Love? sees Burgess take on stirring ballads- like the acoustic closer “What Has Been Is All Within” and “Ain’t That A Woman”- indie pop inspired numbers – the title track and “Could You Watch Me Walk”- and hard blues rockers – “Only One In Your Dreams”- making this quite the versatile record.  While she is certainly at her best when she digs deep into the blues, Emily Burgess delivers a widely appealing album on her very impressive solo debut.