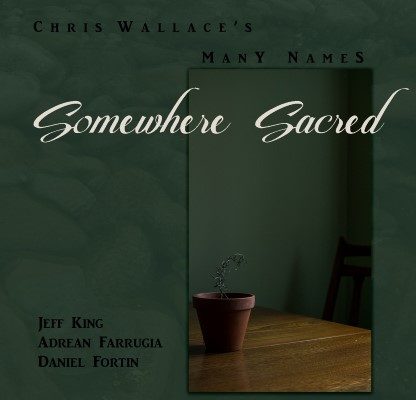 Acclaimed Toronto based jazz drummer Chris Wallace has returned with his ninth studio album, Somewhere Sacred.  His latest album is a follow up to his 2016 release, Many Names EP, and features the same band formed in this period, consisting of Jeff King on tenor saxophone, Adrean Farrugia on piano, and Dan Fortin on bass.  As his second outing with Many Names, Wallace dives deep into a creative well over the course of the record’s ten tracks.

Starting off with “A Memory Of 10”, the listener is greeted with the warm sounds of a grand piano, a warm and smooth saxophone, and a rich flourish of cymbals.  Taking the form of a mid-tempo swing, “A Memory Of 10” takes its own sonic journey over the course of its near eight-minute length- the longest track on the record- through peaks and valleys making for an incredibly dynamic listening experience all on its own- nevermind the fact that it is kicking off a full-length record that proves to be just as exciting to listen to.  To the light ballad of “A Prairie Son” to the upbeat “At It Again”, the level of sophistication and skill found in Wallace’s Many Names is simply incredible.

What was most compelling to me about Somewhere Sacred was the blend between traditional and progressive.  Largely, this juxtaposition is found between Wallace and the rest of the band.  The quartet- comprised of bass, piano, and sax- is a very traditional layout for a small jazz ensemble; however, it is in their playing where the relationship between this band and the early careers of legends of the likes of Coltrane, Hancock, and Carter can be heard. King, Farrugia, and Fortin make for a very tight group of musicians that to say they are among masters at their craft would be redundant.  Their sound pays homage to much of the golden era of jazz which is quite refreshing amongst the plethora of jazz fusion that has been making waves for the past half-decade.  The progressive element is found in Wallace’s drumming that features obvious influences from innovators such as Elvin Jones and Tony Williams- two drummers who were once the most progressive for jazz who, with time and sheer influence over the genre, grew to become partially traditional as jazz caught up to them- but feels more modern than it does traditional.  It is such a fusion of old and new that makes Somewhere Sacred such a thrilling jazz album.

Over the course of Somewhere Sacred, it becomes obviously clear that Chris Wallace’s Many Names is a band to watch out for.  With a level of fluidity and skill that puts them on a national level, Somewhere Scared is among the best jazz records I have heard this year and leaves me excited for what the future holds for Wallace and Many Names.