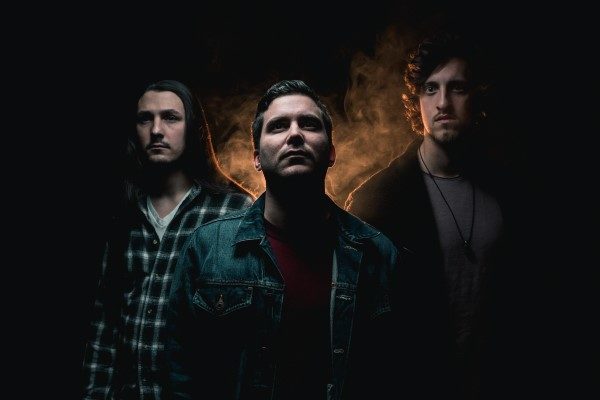 We recently had a chat with Jesse Robitaille of Welland, ON-based band, Street Pharmacy. The band is about to embark on a 13-stop tour in January called The Great Welland Migration Tour, along with Revive The Rose. Find out more about Street Pharmacy in our newest segment of Five Questions With below. Enjoy! 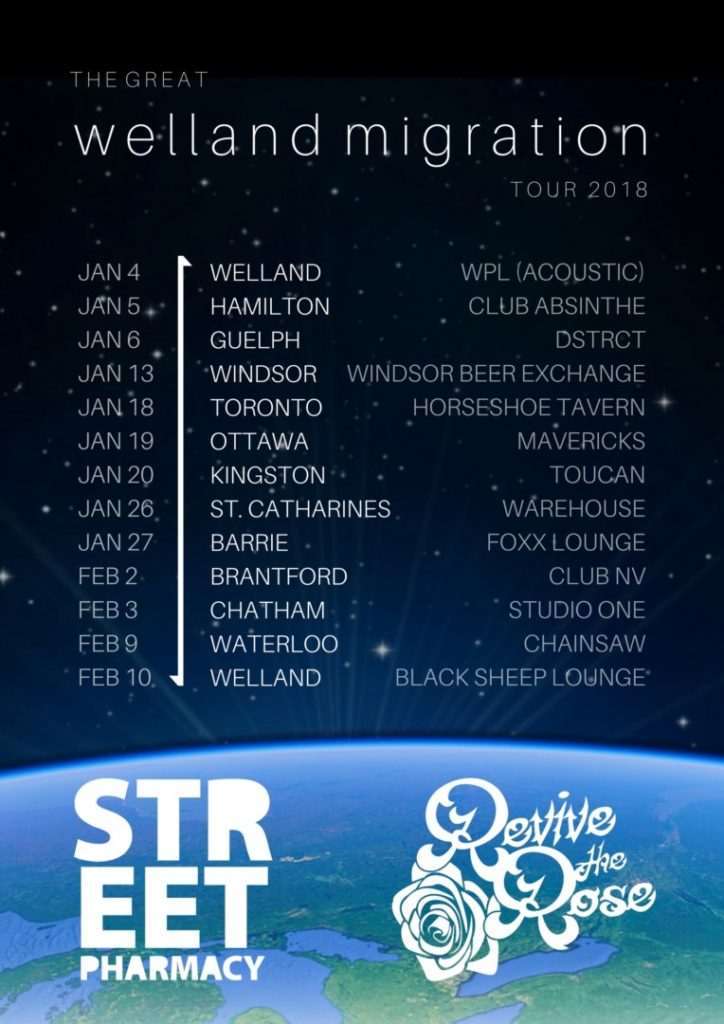 At first glance, we’re a three-piece reggae band. But we’re more like local historians disguised as a reggae band (with hip-hop, rock and other influences thrown into the mix). If sharing stories about our City of Welland sounds boring (it’s not), then you’re just not accustomed to small-town degradation and degeneracy—the kind of stuff you see in the everyday struggle of simple people trying to make sense of a complex existence. We tell their stories—and by extension, our story—with our music.

As mentioned above, we write songs about what we see around us—mainly nearby, but sometimes on a grand scale. Our new record Delusional Discourse (due out in 2018 with the first single “Roaming Souls” coming this January) tells the hero’s journey through the lens of Welland (i.e., small-town) culture. The journey always takes you back home, which is where your head is at, so to speak—inner peace. And while our new album ventures through the subconscious mind, its roots are embedded in what we know to be true, which is home.

We have a 13-stop tour coming up this January when we’ll go across the province for what we’re calling The Great Welland Migration Tour. In homage of the hero’s journey, we’re starting at home, in Welland, and then bringing home with us to 11 other cities across the province before we return to Welland for a final hometown show. How Odysseus…

If you’ve never seen us live, it’s a bit like an extreme sporting event. Perhaps more concisely, it’s like if three regional elders (so to speak—we’re kind of old now) were to commentate a bar fight caused by infidelity and fuelled by drugs and alcohol (at +19 shows only, of course, our all ages shows are pretty tame and age appropriate). And not to sound like a pompous Kirk, but when our fans get together and really boogie down, it’s a pretty psychedelic feeling. Between screaming out lyrics while we’re playing our songs, or yelling obscenities in between songs, the fans really embrace our music and “get” what we’re trying to say. They can relate, I guess because we’re all in the same boat, stranded somewhere between Lake Erie and Lake Ontario.

That’s like asking a parent to pick favourites among their beautiful children—and we have seven albums worth of beautiful children. That being said, this answer is two-fold. First, if you are a fan of our reggae offerings, which makes up 90 percent of our catalogue, we recommend “Welcome 2 tha Street Pharmacy”,  “Sober State of Fame” or “To My High School Friends” as a first listen. If you want to dig deeper into the abyss that is our canal water psyche— “Degenerate” is a pretty succinct explanation of life in Welland; it sums up our ethos well. So does “In This Town,” which is as much about Welland as it is about any small town across Canada or beyond.

This is a fun question and there are so many great ones to pick from. Single Mothers is a magnificent Canadian band. Another sick punk band is Pup.

In the reggae-ish scene, we’re pretty stoked on our buddies Walk Off The Earth, who we used to play with extensively. We have done some collaborations with them as well. Also, Darenots are another up-and-coming reggae act we’re stoked on. iLLScarlett is another noteworthy mention.

Neil Young is forever awesome; not only is he considered the progenitor of 90s alternative rock (or grunge or whatever), but he’s still playing, still recording and still unforgivingly Canadian.

There’s this Toronto kid named Jake Donaldson, too, and he might be the next Bieber (who gets a bad rap, really; we’re kind of Beliebers). Keeping with the modern side of things, Keys N Krates is an unbelievably immersive live EDM group. And who could forget our fellow Welland degenerates in Revive the Rose, who just happen to be our tour partners this coming January and February.

Share this:
Related ItemsInterviewJesse RobitailleontarioOntario MusicStreet PharmacyThe Great Welland Migration TourWelland ON
← Previous Story Joey Niceforo Has A Voice That Is Priceless
Next Story → Five Questions With Revive The Rose