Home / Albums / Review – Neil Young + The Promise Of The Real

Review – Neil Young + The Promise Of The Real 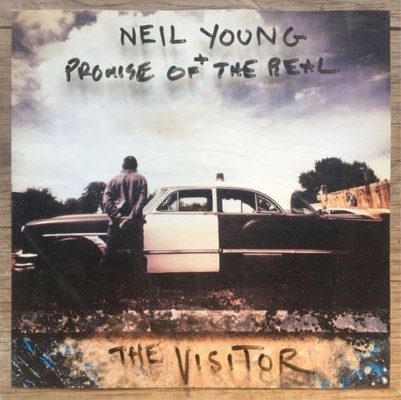 At the age of seventy-two, Neil Young shows no signs of slowing down.  The last few months alone are a testament to that as in September, Young released The Hitchhiker, a lost album that was originally recorded in 1976.  Furthermore, On December first, Young performed an intimate set from his hometown of Omemee, Ontario that was also streamed globally via CBC, and launched his new free streaming service titled the Neil Young Archives. To further add to the celebration of the folk-rock pioneer’s legacy, Young also released The Visitor, his thirty-ninth studio album and second collaboration with backing band The Promise Of The Real.

Opening with a tone reminiscent of Young’s work with Crazy Horse, “Already Great”- Young’s stand against Trump’s make America great again slogan- blends crisp acoustic with thin and crunching distorted electric guitars along with a punchy piano that sounds as if it should be out of a western saloon, and sludgy drums.  Young’s voice sounds like it always has- showing few signs of aging- and comes in overtop the instrumental parts seamlessly.  Vocal harmonies add a rich dynamic to his voice, while the use of gang vocals further builds a sense of variety.  The song itself feels more like a jam as it continues towards the end with the piano adding some jazzy accidentals and a loose guitar solo from Lukas Nelson- son of country and folk icon Willie Nelson.  Meanwhile, the acoustic driven tracks, such as “Almost Always” and “Change Of Heart”, are performed with as much conviction and taste, often incorporating a light organ underneath an array of warm acoustic guitars.

The lead single, “Children Of Destiny”, feels experimental as the band plays behind a thick wall of horns and strings.  With an accessible message of protest against injustice, this song, while certainly good, is likely the weakest of the album.  As for other protest tracks, “Stand Tall” feels more powerful and direct as Young, with little concern for the music, speaks about a number of issues ranging from the current political climate to the environment. “When Bad Got Good” furthers this with its reoccurring chant of “lock him up” set over the sound the rattling of cell bars and cuffs.  In many ways, this is the protest record that best reflects the dumpster fire that was the past year.  Even at the most casual listen to, Young may as well have called the record, “Here’s Lookin’ At You, Trump”, as it stands among some of the most powerful musical statements to emerge this year.

While the creation of Neil Young Archives stands as a testament and celebration to Young’s illustrious and highly influential career that spans just under six decades, the release of The Visitor stands as yet another successful creative statement.  While he has certainly earned the right to be considered among the likes of other legacy acts from the early folk-rock scene of the 1960’s, The Visitor demonstrates that Young is not ready to stop innovating and building on his career.