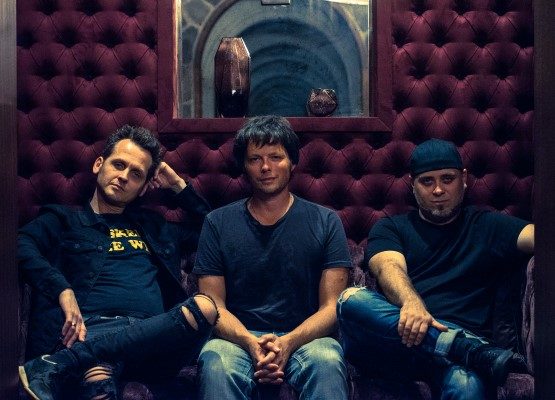 Hamilton, ON-based band, Lava Dolls have just released a lyric video for their single, “The Lucky Ones”, which you can check out below along with our newest segment of Five Questions With. Enjoy!

The connection between a fan and an artist is unique and it’s a relationship that best starts with a direct connection to the music. We don’t talk much on stage and we aren’t really interested in endearing ourselves to anyone in particular.  For a proper introduction to any artist, we feel it’s best to just press play.

Early on we made the decision to not censor our creative process by ascribing it to a particular style. We all fell in love with rock and roll at a young age, so the music reflects that somewhat. But it’s both light and dark, melodic and harsh. It’s quiet despair and primal scream therapy. The contrast between tracks is striking and yet because the music is honest the songs wind up still sounding cohesive.

We’ve got a free show this Friday in our hometown of Hamilton, Ontario to celebrate the release of The Lucky Ones.  It’s the first single off our upcoming Little Secrets EP.  The five-song EP was recorded, mixed, and mastered in 4 days with no computers (entirely analog).  If you close your eyes, put on some headphones, and listen to The Lucky Ones nice and loud you’ll have a good idea of what you’ll get live.

“Behind You With Knives”.  It seems like everyone loves that song. It’s not out yet but it has already won 1st place in the International Songwriting Competition’s Unsigned Category (16,000+ entries from 137 countries).  Lorde, Tom Waits, and the late Chris Cornell were among the final judges.  One day soon some smart record company exec is going to treat us like the whores we are and make a lot of money off of it.

Canadians and their music can be a little too polite sometimes. As a musician, you have the unique ability to communicate life’s gritty truths in a way many people can’t.  It’s an honour, and about the only thing, Lava Dolls don’t take lightly.  Thank God for artists like The Dirty Nil and Neil Young. These are the folks that are still doing it.