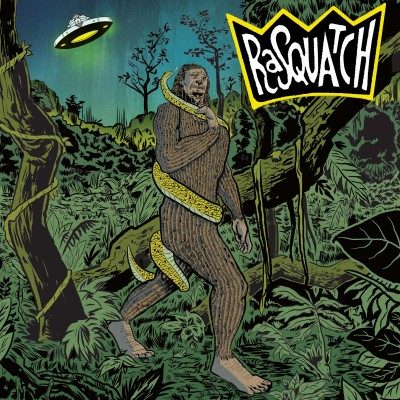 From the album’s cover depicting an illustration of bigfoot wrapped in a snake walking through a swamp under the light of a nearby UFO, Survival In A Sea Of Mud is a very interesting record.  While primarily rooted in reggae, elements of rock- lengthy guitar solos and uses of riffs- and funk – the frequent accents and occasional solos from horns- RaSquatch have a very unique sound that does not quite fit smoothly into any of these categories, giving the band a sound that is quite distinctive.  Songs like “Dirty Groove”, “Snake Steak”, and “Gone” stand as entertaining instrumental numbers that demonstrate the band’s musical ability but also how they manage to write a number of instrumental tracks that are more captivating than that of their songs driven by lyrical narratives.  It is in these songs where RaSquatch shines best.

While songs like the album’s opener “Cuss Cuss” and “Good Feeling” continue to demonstrate strong songwriting, there is an element of Survival In A Sea Of Mud that feels a touch like a caricature of reggae.  This is most apparent in the lead vocals and gives off a feeling that borders on silly at times; ultimately making RaSquatch’s record feel more like a parody than an innovative step forward for the genre.  In this case, the songwriting and performance of the band seem to take a backseat to the vocals which seem to distract from the pros of the record.

While flawed, RaSquatch’s first attempt at a full-length record is an entertaining one.  At it’s best, it is an instrumental album that seamlessly fuses reggae with rock and funk in a manner that also seems to teeter towards jazz fusion making for a sound that feels eclectic.  At it’s worst, Survival In A Sea Of Mud is an album that seems to imitate its influences in a fashion with less than comical results.