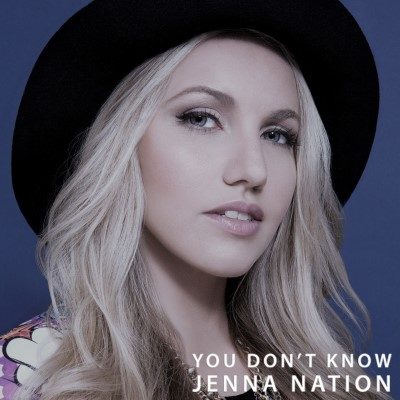 Everywhere we look it seems that we are reliving the nineties; from the revamped re-release of the Nintendo and Super Nintendo to the Tamagotchi being advertised as one of the must-have toys of the holiday season. I’m not complaining. I grew up in the nineties and feel like we had some pretty amazing things; especially the music.

Many current artists find great influence in the music from the nineties and JENNA Nation is no exception. After finding success with previously released albums, JENNA Nation is back with her fourth album You Don’t Know. This album has a contemporary sound with a 90’s R&B influence. She mixes together something old and something new to create a sound that is both familiar and fresh.

I definitely get the 90’s feel right from the beginning of the album, with the title track “You Don’t Know”. It leaves me reminiscing about school dances and some of the awesome music we would play. I am confident that this track would have made it in rotation on our playlists.

“Turning Back Time” is definitely one of my favourites. Adding the interlude just before the start of the track was pure creative genius. The soft melodies, powerful vocals, and simplicity of this track creates the strong feeling that something is about to change; similar to what you would see during live productions. And that is exactly what happened. At this point, Jenna graces us with a tale, a song of a love that is no more.  Gone are the synths and effects that have been used up to this point. She simply uses the melody to entrance us all with the feeling of a love that we’ve lost.

“Drunk and Dreamin'” was released as the album’s first single late last year and has been receiving praise ever since.  The melody gives us the impression of one remembering a hazy dream through the ambient kind of sound with echoes and long reverbs. Soft synth sounds that seem to fade in without a strong attack aids in creating this dream feeling.

I especially like the effects that are used throughout the album; from the synths to the unique use of various tempos and the electronic piano that adds a unique touch. Bringing in different instruments throughout the tracks leaves the listener wondering what she will surprise us with next. It adds extra emphasis and emotion to the melodies, adding to her soothing and soulful voice. With her incredible range and vocal abilities added to beats that groove, you will definitely want to press repeat once the tracks end.

During the creation of You Don’t Know, Jenna had the opportunity to work with some of the best in the industry to show a true reflection of who JENNA Nation really it.  She felt that “ a lot of people have certain expectations or preconceptions of me and so that is why I titled the album “You Don’t Know” because most people really don’t know who I am or much about me until they hear my voice and what I have to say.” Now I challenge you all to take the time and listen to this album. You won’t be disappointed!