Five Questions With The Achromatics 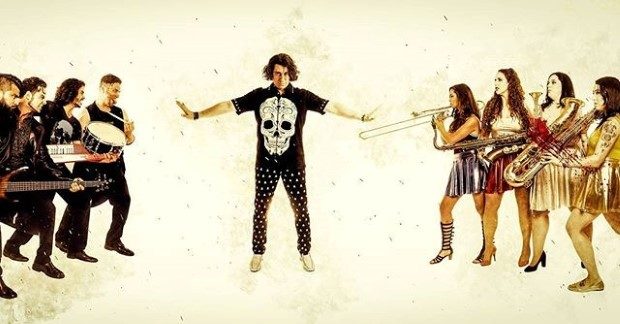 We had a chat with Matt De Luca from Toronto’s own The Achromatics for our newest segment of Five Questions With! The band has a show tonight at Hugh’s Room Live which is actually their album release show for Give Me That Beat. If you’re in the area, be sure to check it out!

Hi, I’m Matt De Luca! I play bass and write music for The Achromatics from Toronto, ON. Occasionally I can also be found trying to keep up with the front line’s dance moves. It’s a workout…

I’m thrilled to be a member of The Achromatics. We’re all about infectious grooves, turning every show into a dance party, and just general good vibes!

The music of The Achromatics is best described as Latin soul, but being a nine-piece band all coming from different musical and cultural backgrounds, it becomes so much more than that. Some of us come from jazz and soul, others from rock and pop, but we all found a common ground in our appreciation for the seductive rhythms of Latin styles such as salsa, merengue, and bachata. We enjoy writing songs that have a little bit of each of our influences merged with a Latin undertone. The result is a unique sound that entices people to get on – and stay on – their feet.

Different people write in varying capacities for the group. With nine band members, we rarely start a song from scratch all together, so what generally happens is someone will have a rough idea for a verse or chorus, and that gets sent around amongst the various band members, who might be inspired to add to it. Once it’s reached a near-complete state, we run it in rehearsal and everyone adds their own flavour to it. We very originally call this “Achromaticizing” the song. (Aren’t we clever?!)

We have a show TONIGHT (November 29th) at Hugh’s Room Live in Toronto. It’s our album release show for our debut album Give Me That Beat and it’s going to be an all-out dance party complemented by DJ General Eclectic. He’ll be spinning before and after our set to keep the party going. After that, we’re playing at Supermarket in Toronto on December 21st.

Our live performances are a high-energy, choreographed spectacle, complete with really vibrant outfits, so every show is made to engage your ears, eyes, and body – just try not to dance!

This is a tough one… we want you to listen to them all! But if you’re going to twist my arm, I’m going to break the rules and recommend two: “Give Me That Beat” for something more pop-oriented, and “Wake Up” for one of our more Latin-forward songs.

Asking nine musicians to name their favourite bands/artists is quite a wormhole to journey into, but here’s a selection in no particular order: