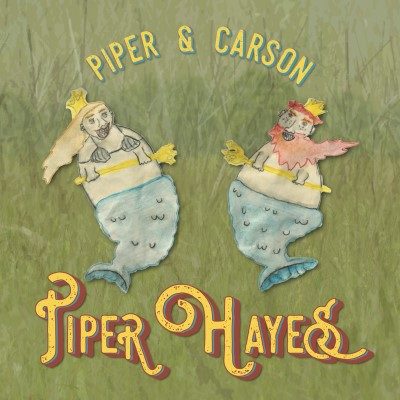 Toronto based folk singer and songwriter Piper Hayes is about to release her brand new full-length entitled Piper & Carson on December 8th. Piper has also recently released a video for the single off the album called “For All We Know”. Canadian Beats had a chance to have a chat with Piper to talk about this release, music, writing and touring. Check out what she had to say below.

I was born in NYC, raised in Toronto and now live in Hamilton, Ontario. I am a storyteller with lots of love to share. I truly enjoy meeting people everywhere and finding a connection in unlikely places.

Tell us about this release.

This release represents so much to me. It is my first full-length album that I am putting into the world and I am so very proud of what I’ve created. This is probably the first time I’ve felt this much confidence in my artistry. The music is powerful and the message clear. We recorded the bedtracks on Thorpe’s Organic Produce farm, and we made magic in that century-old living room. I could not have had a better musical/production team than Carson Ritcey-Thorpe, Chris Bartos, Kevin Neal and Fedge Album Mastering.

I titled the album ‘Piper & Carson’ because that’s just what it is. We love making music together and this album reflects the life Carson and I have built. Piper & Carson is also dedicated in loving memory to my mum Maggie Thompson Hayes.

Where do you get your songwriting inspiration from?

I get it from the world around me; my personal experiences and stories people generously share with me from their own lives. I suppose a lot of what becomes art in my life started out as some serious pain. It is fascinating to me how often discomfort can spawn creation; and how transformative music can be for healing. When I sit down to write, the first question I often ask myself is ‘What are you wanting to say? What do you need to be heard? And how are you wanting to say it?’

What do you enjoy the most about writing and performing with your partner Carson?

Well, Carson is one of the most incredible humans I’ve ever known. I feel lucky every day to have him in my life so closely. The thing that I’ve always truly admired in him is his gentleness. He has not a single ounce of ego on stage or in life. He makes people laugh and he puts them at ease. He balances me out and makes sure to acknowledge all that I do. He has this ability to draw out aspects of myself that I had not yet discovered before meeting him. It is these qualities that have added dimension to our writing sessions as well as our on-stage performances.

What is your favourite song from Piper & Carson, why?

Honestly, it is really hard to pick a favourite from this album because it is a collection of my favourites already. If I had to pick just one, I think right now it would be ‘I Don’t Wanna Go On.’ November 25, 2016, was the day my mum passed and I find this song tugging at my heartstrings, as one year has now gone by since her death.

If you could describe your music in 3 words, what would they be?

I like to think of my music the way I remember my mum…pure, exuberant and inclusive.

What inspired you to get involved with the Canadian Mental Health Association?

It is my own history of mental illness that lead me down the path of advocacy and collaborating with CMHA. I struggled with an eating disorder for ten years from age 13-23. One of the main things that led to recovery for me was finding spaces and people to share my story with and connect to. Not everyone has the support I was privileged enough to have in my family. I want others to know what is available to them and give them an outlet where they maybe have none. I love reminding people it is possible to heal and that there are people and programs out there wanting to help. We don’t really learn how to effectively ask for help in our culture and there is so much shame around mental illness. I want to help reduce the stigma by telling my story and being an example of what is possible.

Tell us about the two CD release concerts in the works.

December 7th will be in Hamilton at This Ain’t Hollywood, show at 9 pm. Our fabulously talented Guelph based friends The Lifers will be kicking off the night for us. We saw them perform at Folk Music Ontario Conference this past October and it changed my life. On stage with me will be Carson Ritcey-Thorpe on guitar and vocals, Bill Simms on upright bass and Sam DeRosa on the mouth harp.

December 8th will be in Toronto at The Dakota Tavern, doors at 6 pm, early show folks at 7 pm. Be sure to come right on time because our incredible friends Our Shotgun Wedding are coming all the way from Owen Sound to open the night. They are some of the best songwriters I know, and we often play their albums on repeat on the road. On stage with me will be Carson Ritcey-Thorpe on guitar and vocals, Bill Simms on upright bass and Chris Bartos (our producer) on fiddle. I am just thrilled to have Chris performing at the album launch because he was truly instrumental in the creation of this album.

Are you planning on touring in support of this album?

Absolutely. I’m booking into the New Year now and will be announcing some southern Ontario dates very soon. I’ve also begun to book a springtime east coast tour and a summer west coast tour. Carson and I will be going to Folk Alliance International in Kansas City in February 2018 and are so excited to share this new music.

Canadian Beats likes to include a “just for fun” portion to help our readers and your listeners get to know you better, ready?

What are some of your musical guilty pleasures?

My background is in musical theatre, so the soundtrack to Les Misérables is high on this list, and yes, I do know the entire show by heart. Also, I really love the soundtrack to Beauty and the Beast…I love haunting things and I find that opening song from the original Disney movie so evocative, it plays when the story of the castle is being told and because Disney is very problematic it does feel like a guilty pleasure.

If you had to narrow it down to just one, what is your favourite song of all time?

Nina Simone’s rendition of ‘I Wish I Knew How It Would Feel To Be Free,’ written by Billy Taylor and Richard Carroll Lamb (Dick Dallas).

What was your most embarrassing moment?

I try not to take myself too seriously, so I don’t think I’m easily embarrassed. From a young age though, I didn’t want people to ever see me as weak, so I adopted the old laugh at yourself before anyone else does philosophy. I do have this one memory of peeing in the shower after swimming lessons at about 9 years-old. I remember another kid noticing and calling me out on it. For some reason, I still have this vivid memory of it and the feeling of shame that washed over me.

What are 3 things (not music related) that you couldn’t live without?

My humidifier in the winter (helps keep my chords lubed up), being able to cook my own food and connection with other beings.

Last but not least, is there anything you would like to say to your fans?

Thank you for all the love and support you show me. It means the world to be able to share my story with you all and be heard. I always look forward to seeing you in person and keeping in touch. Keep dancing, keep singing and keep howling!