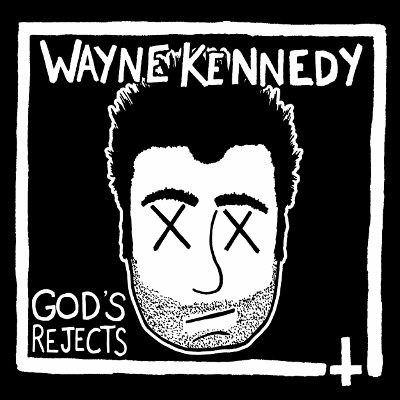 The name Wayne Kennedy is synonymous with the punk music scene in Oshawa-Peterborough-Toronto. As the creator of the ‘$2 Punk Show’ that were hosted at various locations around the Durham region, Wayne was instrumental in ensuring the prosperity of a genre that can easily be washed out by today’s Top 40 market. It was at a $2 Punk Show that I first met Wayne a few years back when The Anti-Queens were performing at The Moustache Club in Oshawa. It was obvious that the musicians and fans had the highest of respect for his efforts. Now a relic of the past, the $2 Punk Show was retired so that he could focus on his own music career.

God’s Rejects is bold collection of tunes that represent his best music yet. The lyrics are poignant and weighty, but are also direct and give the listener pause as he energetically strums on the acoustic guitar. The acoustic guitar is not a traditional element in punk music, but Kennedy’s strumming make the instrument pretty damn punk! Kennedy’s vocals, although slightly strained at times, are raw and tender and suit the angst delivered in his music. Furthermore, the addition of bass guitar adds a welcome richness to God’s Rejects that was not present on his first two EP’s.

In punk music tradition, not a single song is over two minutes, with the exception of the first song, and title track, which tips the scales over by a mere three seconds. The catchy opening chords beckon you to the dance floor for a healthy dose of moshing around. This energy keeps up for the entire five songs, when the party is officially declared over.

If you frequent the venues in and around Durham there is a very good possibility you will run into Kennedy. Although the days of the $2 Punk Show are numbered, he is wrapping up a collection of “Thursday Nights with Wayne Kennedy” (folk and punk music with no cover), at The Atria in Oshawa, which is running from Sept. 14 – Dec. 1.

Head over to Bandcamp to purchase your very own copy of God’s Rejects and help give back to the man who breathed life into the punk music scene and gave it life for years to come!