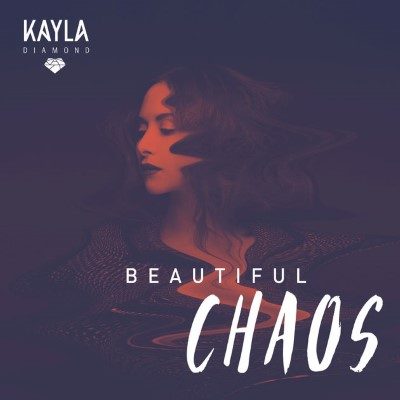 For Toronto artist Kayla Diamond, her debut EP Beautiful Chaos is a coming-of-age story. For the rest of us, it documents a pop star in the making. Like many Canadian musicians, her musical roots began with the Royal Conservatory of Music, playing classical piano as a child. After unexpectedly winning a recording contract from Slaight Music’s “It’s Your Shot” contest in 2015, Diamond left law school to focus on her music career. She’s kept the discipline required to become a crown prosecutor, her former dream, as she joins today’s realm of powerhouse singer-songwriters.

Diamond flaunts surefire indicators of success in the industry with this release. She has the look, the voice, and the musicianship- subsequently forming the image, Generation Y’s quintessential top-of-the-charts figure. On the cover, her dark red hair is ablaze even when overcast by an indigo filter. Auspiciously, it’s not just her bold eyebrows that match this intensity. The album has the energy of 2000s pop-punk greats while maintaining the modernity of 2017’s production abilities and EDM-centric ideas. Diamond’s voice is voluptuous when soaring over crisp beats, hair-raising when intertwined with prodding bass lines.

While commendable for her detailed calibrations in the studio, there are moments where Beautiful Chaos could use a few strokes of innovation. “YOUNG STUPID LOVE” and “What You’re Made Of” almost sound like covers of top 40 hits (Diamond is known for these on her Youtube channel). It’s not a question of competence- “Carnival Hearts” is whimsical and adventurous. Her vibrant personality shines as she explores a darker bubblegum pop with sophistication- capturing sanguine enthusiasm without the cavities.

Beautiful Chaos exemplifies new talent, featuring catchy melodies and panoramic instrumental arrangements. Now that Diamond’s proven she can excel in the music scene, it’s time for her hold her own within it.