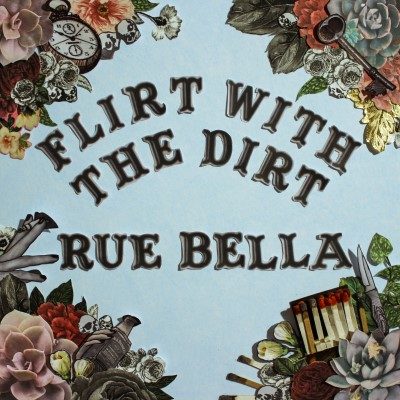 After making waves across Southern Ontario, including sharing the stage with Finger Eleven and The Trews as well as winning Rock 95’s Local & Loud 2016 competition, Rue Bella has released their debut album, Flirt With The Dirt.  The Newmarket rock outfit- consisting of lead vocalist and keyboardist Taylor Cos, guitarist Brandon Webb, bassist Adam Clarke, and drummer Clint Delbrocco- shine on their full-length record, making this a must hear for those who listen to rock of all varieties.

Opening with “Burn My Home”, it becomes immediately clear that Flirt With The Dirt is an ambitious album fueled by Rue Bella’s hunger for greatness.  Despite that, the tone of the album is the equivalent to that of a raised middle finger to your expectations.  This record is oozing with attitude in a fashion that is reminiscent of 1970’s punk.  Cos’ voice is the perfect blend of Joan Jett and Taylor Momsen, giving the band a hard edge that teeters towards punk and classic rock which makes the band feel fresh and unique among today’s modern scene.  The use of Cos’ keyboard juxtaposes nicely against Webb’s heavy guitars that are laden with a thick and crunching distortion giving songs like “Burn My Home”, “Piggy”, and “Something Witchy” a slight jazzy and rockabilly flair that feels nostalgic to that of Burlington’s The Creepshow.  Their cover of Nirvana’s 1991 hit, “Come As You Are” gives the song a layer of depth from its melancholic approach that takes place primarily on the piano and stands out as one of the best tracks on the album.

Despite how creative the previously mentions songs can be, Rue Bella is at their strongest when they take a turn for the heavier.  Songs like “Red Room” and “Socialites” are driven by a raw sense of grit, frustration, and aggression that only furthers the attitude propelled throughout the record.  “Black Solitaire” takes such a heavy stance during its choruses, contrasting greatly from the song’s soft and jazzy verse, making it not only one of the most interesting songs on the album, but demonstrates the unique songwriting behind Rue Bella.

Flirt With The Dirt is a fantastic record, but Rue Bella know that, nor do they need your praise.   This is a record that is right in line what rock & roll’s greatest icons have been about from the 60’s onwards.  Rue Bella seamlessly blend elements of punk with modern and classic rock along with a touch of jazz to create a sound that is truly unique to their identity.  As a debut record, Flirt With The Dirt is as strong as they come and instantly puts Rue Bella among some of Canada’s top tier of up and coming rock bands.