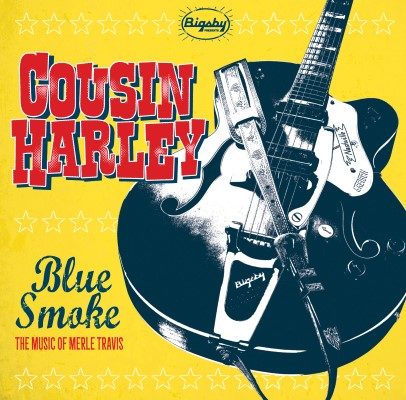 Given my predilection for overly wordy, deep dive simile-filled comparisons pulling from varying genres to best describe an artist’s sound, style or delivery, I just want to say, here and now, officially, “So good.”

Gretsch endorsee Paul Pigat (guitarist, vox) and Cousin Harley bandmates Jesse Cahill (double bass) and Keith Picot (drums) pay homage to one of 20th century’s most influential guitarists – and their musical hero –  faithfully recreating the sounds, stylings, and feel, on what would have been his 100th birthday, of guitar phenomenon, and highly influential country songwriter, Merle Travis.

Front to back the eleven Travis, and one original, tracks on this album are purely delightful, recreating the style and sound of a country-guitar / rockabilly forerunner.  Right off the hop, with the first two pickup notes on the opening track “Divorce Me COD”, is an up-tempo, natural reverb guitar, with the band ready at the drop, to swing those blues with a light, energetic, carefree delivery.

The trick with country guitar and rockabilly is creating the ease of sound while locking-in tempo and groove; rockabilly grooves like nothing else needing to lock-in tighter than a Glenn Miller big band chart.

These tunes jump start your battery right when the tightly capri-jeaned, bouffant-haired beauty drops the red and white polka-dotted handkerchief to start the drag race, which is the acceleration from “Deep South” to “Blue Smoke”, adding bass and drums to a solo guitar arrangement, the long straight away with twists and turns coming ahead, a sticking gas pedal and brakes that, although not needed, wouldn’t work anyway.

These tunes don’t have room for medieval flute solos or ambient classical harps.

They made a Hank Williams cover record in the mid-90s called Hanky Panky, a decent record that sounded just how listeners would imagine The The envisioning Hank Williams’ songs.

Cousin Harley, instead, stays remarkably true to the source material, as in “Too Much Sugar For a Dime” and “Cincinnati Lou”, while adding their own touches, whether it be in a slightly different style or tempo changes.  An impressive element about Blue Smoke: The Music of Merle Travis is when artistic choices are made every tune sounds like it could have been recorded by Merle Travis with astounding attention to musical phrasing and details, as in “Re-enlistment Blues” and “Fat Gal.”

Being known for writing songs about blue collar workers and the exploitation of coal miners, it is no surprise that Merle Travis’ “Sixteen Tons” is arguably his most well-known, and most widely covered tune, being performed by such diverse acts as Tennessee Ernie Ford, The Platters, Stevie Wonder, ZZ Top, Jeff Beck, Tom Jones, Rockapella (“Do it, Rockapella!”), and Johnny Cash when he had a moustache.

Cousin Harley put their own personal spin on “Sixteen Tons” giving it a moody, muted vibe while still retaining a traditional country-guitar vibe; Merle Travis could be heard playing this version of “Sixteen Tons” if he chose, not like the sludgebilly version by Montreal duo extraordinaire Deja Voodoo, which I love.

The attention to detail is precise and to the point that “Dark as Dungeon” is played at the same tempo as the original.

Adding an extra level of expertise to the performance of the record is playing using Travis’ signature style “Travis Picking”,  a syncopated style of guitar fingerpicking where alternating chords and bass notes are plucked by the thumb while melodies are simultaneously plucked by the index finger giving a full solo and accompaniment sound all in one.

With its yellow coloured jacket and old-school stars, Blue Smoke: The Music of Merle Travis even resembles the look of Merle Travis’ 1956 record The Merle Travis Guitar to add a visual homage to the sonic one.

Paul Piga’s voice sounds deep, rich, and clean throughout the album with the instrumental sounds and production choices being first-rate as every part is exceptionally clear and well-balanced.

In the liner notes of the record, Pigat writes, “Merle’s swinging fingerstyle playing, driving backbeat, and wry sense of humour are cornerstones of the Cousin Harley sound. Always have been; always will. And, although we’ve taken some liberties and added a bit of the trademark Cousin Harley fair to Merle’s original recordings, we didn’t veer too far off track. Our goal was to pay homage and respect to this inspirational American music icon. Why mess with the best??”

To add to the historic significance of the record, Blue Smoke: The Music of Merle Travis is sponsored by Bigsby Guitars, whose founder, Paul Bigsby, worked with Travis in 1948 to build the first modern solidbody electric guitar, and is widely known for the Bigsby tremolo arm, or vibrato tailpiece, a staple of country-guitar / rockabilly players.