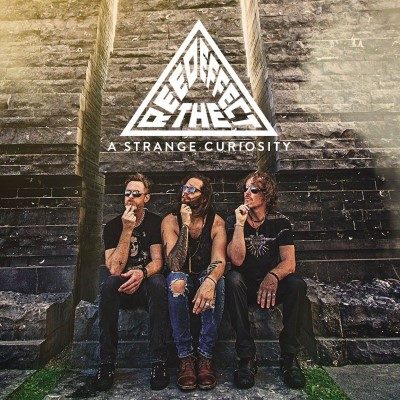 Toronto’s very own The Reed Effect have released A Strange Curiosity, the follow up to their 2016 self-titled debut. The hard rock trio- consisting of lead vocalist and guitarist, Kirk Reed, bassist Chris Reed, and drummer Bryan Fontez (who also sings for Toronto’s Last Bullet)- have struck gold with their latest record, a six-track EP that is among the best up and coming releases of the year.

A Strange Curiosity opens with the crunchy and bending guitar riff of “Down In Here”.  The song not only pulls the listener in immediately but is incredibly catchy without compromising its musical quality.  The song features numerous subtle guitar solos underneath the riff and Kirk’s vocals that are by no means subtle in nature, only volume; in fact, they are quite explosive.  This form of weaving solos together down in the mix is very unique and reminiscent of the manner in which Soundgarden’s Kim Thayil would solo under the vocals of the late Chris Cornell.   While I rarely ever compare anyone to the work of Soundgarden or Cornell, I must admit that few have been able to throw lead lines in such a tasteful manner that low in the mix since then.

Over the course of A Strange Curiosity, The Reed Effect dips into a wide range of influences and styles.  “Get In Line” takes the band through a doomy psychedelic acid trip reminiscent of Alice In Chains, whereas The Doors inspired “Red Rover” gives the band an experimental flair as they toy with jazz rhythms and features Fontez on percussion, keys, and trombone, giving the song a stylistic and textural difference from the rest of the record.  As far as the strongest track on the album, I would say it’s a tie between the haunting vibes of “Get In Line” and the explosive lead single, “No Way Out Of Here”.

Through its six songs, A Strange Curiosity captures the essence of The Reed Effect as a hard rock band who a tenacious and creative attitude towards experimentation.  As a result, their sophomore release is not only a powerful but among the strongest work I’ve heard from an up and coming rock band.  Without a doubt, this is a record to check out for fans of rock from the 1970’s and 90’s as the record offers a perfect blend of the two while remaining entirely unique amongst Toronto’s vast rock scene.