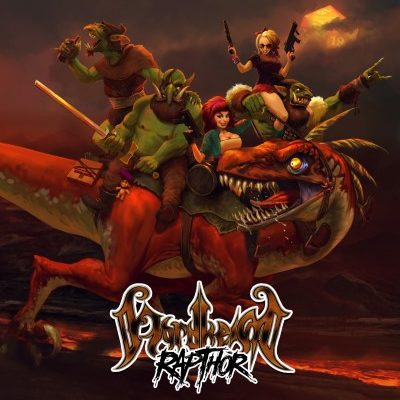 Nordheim, hailing from Quebec City is back with their third album Rapthor. This album is a lot heavier than their previous releases; Refill (2013) and Lost in the North (2011), though still staying true to folk-metal similar to Wintersun, Finntroll and Equilibrium. Although this album has stepped up and introduced a heavier side, it’s still fast, and catchy. Guaranteed you’ll be partying by the end of it… and whats more of a party then dinosaurs and beer?

“I Wish You Were Beer” is the first single from the album. Which can be viewed here. The track has a very Flogging Molly meets Alestorm feel to it. If you need a track to ease yourself into the album definitely start with this one. Though the album implements the heavier vocal aspects of metal and faster guitars the balance keeps the song at a more melodic feel.

Warraxe states on the single,

“You know the feeling you get when you are impaling a busty T-Rex with your giant throbbing errecsword while lightning strikes you and transforms your hand into a fucking laser-cobra? Well this song isn’t close to that but it’s still pretty good.”

Which is a perfect description of the rest of the album, including the track “Boobs and Bacon”, unlike the single, this track is a lot heavier on the vocal aspects. Bringing in faster-paced guitars and drum beats, this song delivers what the album is aiming for; a heavy party hitter. Don’t be thrown off with the metal aspects, the band still implements Celtic-folk feelings within the songs. This is a track that will get you bopping your head.

“Troll Riding a Raptor”, which happens to be the opening track of the album is similar to “Boobs and Bacon” but possesses a faster-paced beat. It’s almost like riding a raptor into the rest of the album, which will be chaotic fun.

Be sure to check out their bigcartel and Bandcamp for the album and other merch.