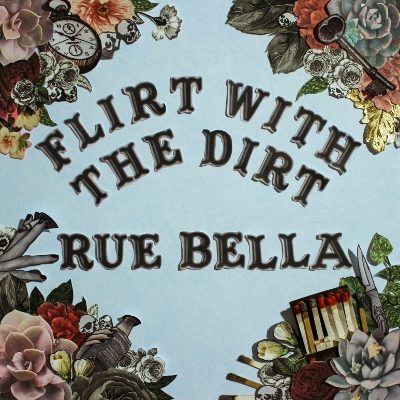 Rue Bella are celebrating the release of their debut full-length album, Flirt With The Dirt, with an album release party tomorrow night at The Foxx in Barrie along with an outstanding cast of supporting bands: The Noolands, Hot Lips and The Crooked.  Stay tuned for photos from the show and our review of the album, which is available for streaming or purchase tomorrow!

We had the chance to catch up with Taylor Cos, the lead singer of Rue Bella to find out a little bit about this alternative rock band that is making waves in the Barrie/Toronto music scene.  Keep an eye out for them in your area!

Our music has been described as a heavier version of Portishead. Or Queens of the Stone Age vs Fiona Apple.

We’re a little all over the map but I’d say the word moody is accurate throughout. Whether it’s sassy and sarcastic, sincere and heartfelt, or just flat out pissed off. There’s an intensity we deliver and Flirt with the Dirt really showcases that.

Yes we do! We have our album release party at The Foxx Lounge this Saturday, November 25th. After that we are playing Hard Luck Bar in Toronto with our friends Iduna on December 15th.

Got Lost. Or Piggy.

I’m a huge fan of the independent scene throughout Southern Ontario, some of my favourite bands that fall in that category are MIP Power Trio, Sedge, Bike Thiefs, Output, and Heart Attack Kids. Other Canadian artists I love are Leonard Cohen, Chad VanGaalen, Metric, Broken Social Scene, and Pup.