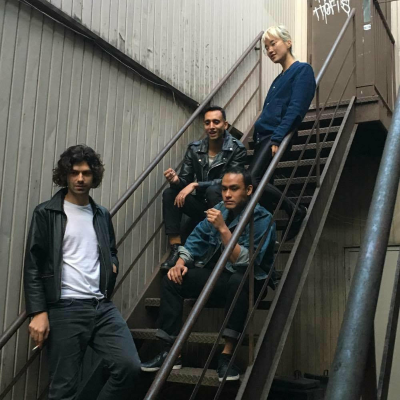 Montreal based band, Ouragan have released a video for their new single, “Consolation Party”, and we are happy to be chosen as the outlet to premiere the release.

We asked the band about the video, they stated,

“Consolation Party is our latest single release, from upcoming EP to be released this winter. The song is about wasting time at never-ending parties and what people are looking for at the end of the night.”

Ouragan will be playing a show at La Vitrola in Montreal tonight (November 22), so if you’re the area be sure to head to the show! In the meantime, check out the video below, as well as our newest segment of Five Questions With.

Hello hello. It’s me Guillaume from Ouragan. Born and raised in France drinking wine much too young. I started playing on my dad’s guitar during the most boring summer of my life (we didn’t have money to travel back then). Later I moved to Montreal and met Naseem (bass), Lan (drums), and Yang (keys) mostly on craigslist. Now we’re a big family.

It’s a mix of French and English, not because we’re in Montreal but because our musical influences go from French 60’s nouvelle-vague cheesy classics to British post-punk. Lots of songs are about falling in and out of love – a mundane theme indeed, but I always try to look at it from a modern angle.

We are going to play La Vitrola this Wednesday (Nov 22nd), Ottawa on the 15th (Bar Robo) and Toronto on the 16th (Burdock). I’d describe the performance as ‘Rick Springfield on fentanyl’. Come see us, we could become friendly friends.

Yes, yes check out “Consolation Party” from our upcoming EP. It’s mostly about what people are looking for at the end of the night (hehe).

I’m a big big fan Andy Shauf because he’s kinda different from the rest: shy, smart,  and he sings about life in small towns. But mostly his Saskatchewanian accent turns me on. I also listen a lot to Lyonz: very fresh hip-hop from Montreal with a very unique voice. Finally, I’ve been following TOPS for so long, it’s great to see how they moved from the Mile-End underground to be on huge world tours. They have the catchiest pop songs, Lord bless their souls!