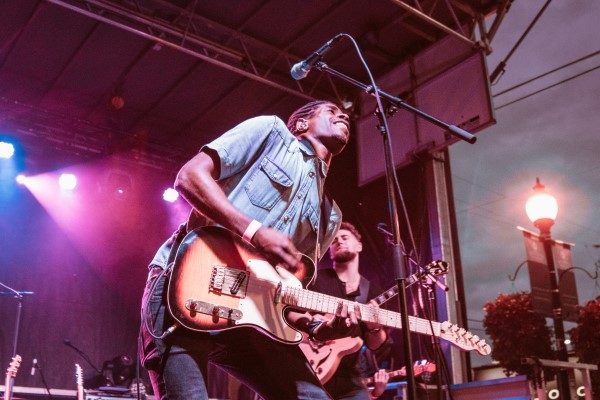 We recently had a chance to chat with Toronto’s own pop/soul artist, ColinResponse in our newest segment of Five Questions With. Enjoy!

ColinResponse. I’m a Pop/Soul artist, I’m from Toronto Ontario. I grew up in Brampton, a suburb of Toronto. I love music, music is my life. I love empowering people, and that’s what I do with my music. Some people say I’m a “glass half-full” type of person.  But to be honest, I’m really the type of person who stays stoked on the fact that I have a glass at all. [laughs] –Reality is some people don’t even have a glass to fill. I’m of optimistic nature, and you know, all my best friends are of that nature too.

Absolutely. My music?  My style? It’s my life, you know. All the songs from my latest album represent a story, a combination of thoughts, experiences I’ve had, or things I’ve witnessed, culminated into one. I wanted to get creative.  From a musical perspective the genres that inspire all of these songs are pretty diverse, the one thing that unifies each particular song, however, is me – It all tells a story about my life and as the genres change with each song, it is my voice that remains consistent across each track.

From a lyrical standpoint, the general theme that unites all my songs is, without a doubt… life.  All these songs depict experiences I’ve had throughout my life – That’s why I created the cover art for my new album the way it is – It’s all a genuine representation of me and my life.  I’m not trying to depict myself as anything other than what I am. And my music is where that all starts.

I can honestly say if you haven’t yet seen me perform live with my band, you have only experienced close to 20 percent of who I am as an artist.  I am a performer first and foremost, before a songwriter, a producer, a vocalist or a guitarist – performing is what I have been doing all my life.

So with that being said if you haven’t yet seen me perform live, and you enjoy anything at all about what I do, I strongly suggest you come out to experience it because there’s a lot in store for you, you haven’t even yet scratched the surface.

It took me a while to answer this question, because each one of these songs speak to me in a different way, and speak to a different period in my life. I’m gonna have to say “She Dances In The Rain” is my favourite. It’s the most mythical of the songs.  It sounds like a fucking’ weird thing to say but, I wrote that song in my dream, literally.

I wrote it when I was in college, living with two of my best friends, Matt Murray and Alex Brekelmans. I had a chord progression I was working on and I said to Alex “Man, I gotta write a new song with this, but I’m struggling”.  Then he’s like “go to sleep.  The key is to stop trying to think about the answer yourself and just ask for it.  Go to sleep and when you close your eyes just keep asking yourself questions like “what’s my next song gonna be about? What is going to inspire me to write something new?”.  And so I was like “alright” and I’ll ask.

Right before I took my nap I opened up my computer and I recorded the progression I made, and put it on loop, at a volume that was quiet enough for me to sleep to, but loud enough so it could be heard. I wanted for this chord progression to find its way into my dream, just like when your alarm clock blares “BEEP! BEEP! BEEP!” and you know, it somehow finds its way to your dream, like a car alarm, or fire truck or something.

So I set that up, went to sleep and I continued to ask myself the same question in so many different ways and as I was falling into a subconscious state. I didn’t command myself to think of the answers, but I asked and simply allowed myself to be open to the universe (before I even knew what that meant).

In my dream, there’s a dude sitting on a wooden school chair, and he looked like a fusion of John Travolta and David Beckham. I asked him “what’s my next song going to be about?” and David Travolta is like “your next song is about making a change”. – I replied, “What!? This is not helpful at all!” <laughs> and I just woke up, perplexed, turned off the recording I had on loop and I just decided to go back to sleep.

Now the second time I dreamt was when the magic happened. I was in an auditorium watching a lecture and after it finished my first bass teacher, Mark Dunn, comes up to me and says, “You need to get a new bass.” He continues, “you need to sound a little bit better”, (which was probably true at the time), so I agreed. And as we walks away I started to notice this catchy tune come over the auditorium P.A. system. I thought it was cool, It had a nice groove, and the chorus was like “the way it works is you fall apart, she dances in the rain” I didn’t think much of it, but I was like “who is this? This sounds pretty sick.”.

When I woke up and paused, and realized I was dreaming. I frantically turned my voice recorder on, grabbed my guitar, and began singing that lyric, with the progression I was working on and I was like “…holy shit!…” This is the same song from my dream.

I’ll be honest, I know it sounds odd, but I don’t really to listen to music all that much. I feel like every being, or most human beings have this intrinsic feeling and this need for entrainment in their lives. That’s why people look for music, as an external source to fulfil that need.  They listen to it and enjoy it. I feel like, just like everyone else, I have that same desire, the only difference is, I satisfy it from an internal source.  I’m usually walking around just singing or playing the guitar, making my own music. So I don’t often have that craving to look for music.

Because of this, my list is pretty modest so I’m only gonna include two: Somebody reasonably established that I am listening to that you might not be yet and I’m also gonna include band who is emerging that I truly believe is going to be doing some great things in the coming years.

So, the first artist, if you’re not listening to him, I want you to listen to Daniel Caesar. I first saw him at Wayhome when I went to see a couple of friends who were playing with him. I had heard of him but hadn’t ever seen him. After that performance and hearing his songwriting, he’s certainly one of my favourite artists right now.

The second one is going to be my good friends MONOWHALES; they always stay throwing it down and releasing awesome stuff.  Though it’s a completely different style than my own music, as they say, “real-recognize-real” <chuckles>.  I’m excited to see where they’re going to be in these coming years. So Check out Daniel Caesar and MONOWHALES.