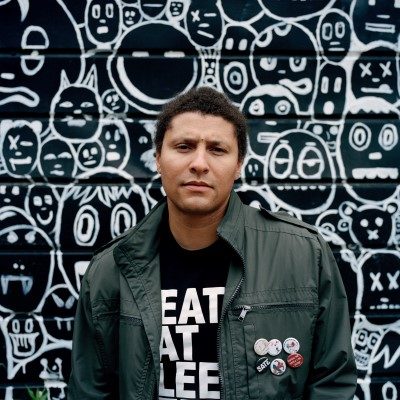 Toronto based artist Alex St. Kitts is about to release his biggest solo project yet. The project, appropriately named The Projektor II, will be released in two EPs that will come together as a full length in 2018. Canadian Beats had the chance to catch up with Alex to chat music, touring and even embarrassing moments, find out what he had to say below.

I live in Toronto (originally from a really small town called Snowball). Been playing music for as long as I can remember but I’ve been doing it professionally for about 10 years, song writing more for the last 6-7 years.

What are your biggest musical influences?

My Dad, George St. Kitts. He has an R&B album called “Never Stop” which I used to listen to on repeat. I also am a huge Beatles fan (John is my favourite!). Other big influences are Michael Jackson, Stevie Wonder, Lenny Kravitz, Little Dragon, Tingsek, James Blake, Prince and the list goes on and on.

Where does the inspiration for your songwriting come from?

Anywhere and everywhere haha I might be walking down the street and hum a melody to myself, or even watching a movie and suddenly hear a drum groove. I also get really inspired listening to local Canadian artists like River Tiber, Charlotte Day Wilson, Daniel Caesar & Slakah the Beatchild. It makes me get competitive (in a good way) to see if I can write something just as great.

What made you decide to take on such a massive solo project?

I wanted people to see me in a different light, as an artist and less as a just a bassist. As much as I love playing for all kinds of great artists, I started realizing I had more to offer than just the one dimension of bass playing. It’s something that I just had to do to be happy and to release a lot of pent-up creative energy.

Tell us about the Projektor Series.

I’m using The Projektor series to tell stories and write songs that I hope give people feelings they’ve never felt or hadn’t felt in a long time. I talk about different issues in today’s world ranging from the invasiveness of social media which makes us feel less able to be ourselves, to how we still haven’t paid enough attention to our Indigenous people’s communities. It also focuses on the good things we often take for granted like the simple feeling of being in love or enjoying a hot summer breeze.

When can we expect a tour in support of this release?

I’m starting to book a tour for the end of February to the middle of March through Ontario, Newfoundland, Alberta. Hoping to add more stops along the way.

You have been sharing the stage with many great artists for a while now, what has been your favourite stage moment so far?

One of my most favourite stage moments so far is a toss up between getting to play “Purple Rain” for a great crowd on tour with Francesco Yates at the Bell Centre in Montreal or the first time I played my own material this year at Adelaide hall… we did a whole bunch of new songs and people were really into it. Just solidified for me how much I wanted to continue striving to be the best artist I can.

Oh, there are quite a few, but there is one that sticks out. I was playing a show in Toronto and was having a great time… jumping around, getting the crowd pumped up, pulling all the bass faces. Unfortunately, in the whirlwind of the performance, I forgot to make sure my strap lock was secured. I started getting really into it and jumping (as I do) and suddenly the bottom of my bass drops down hard on the ground. I was shocked. I grabbed it to look at the damage and saw that the cable tip had broken off and was stuck IN THE BASS. This is all while the show is still going on, I didn’t know what to do. A stage tech came over, grabbed the bass and walked away (thankfully by this time we were on the next song and I wasn’t playing). He comes back and hands it to me and the broken cable tip was gone! Apparently, the tech pulled it out WITH HIS TEETH! I was blown away (and super grateful haha).

Out of all the artists you have toured and played with, who is the easiest to tour alongside?

They’re all awesome to tour with, but I think if I could choose one it’d be my friend JP Saxe (check him out, he’s wicked).

What do you want listeners to take away from The Projektor?

I think we all get very consumed in what we’re doing in our own bubble that we forget we live in a world full of people with totally different views than ourselves, and this leads us all to clump together with like-minded people and bring very little change. I hope that listeners connect with the stories in these songs and take the time to try thinking about what it’s like through another’s eyes and empathize with what they might be going through.

Can we expect more solo projects to come?

I’m already dreaming of the next album. I want to once again take on all the producing myself and work mostly out of my home studio. I’m experimenting with the sounds of the late 60’s/early 70’s rock and funk with bands like Funkadelic and Led Zeppelin.

Is your solo career going to be your main focus now, or can we still expect to see you rocking the stage with some of the many artists you play with?

My solo stuff is definitely becoming more central to my life now and how people see me as a musician. But I don’t think I’ll ever stop playing with other artists, it’s way too much fun.

Here at Canadian Beats, we like to include a just for fun portion to help your fans get to know you better, ready?

Good question. I think I’d be a video game tester haha I’m a big video game nerd, it’s usually what I do in my spare time when I’m not doing music. I also wanted to be a professional skateboarder before I started doing music seriously… I think I’d still be heavily into that!

I can cut a rug when the occasion calls for it. I pretty much know all the choreography to Beat it and Billie Jean haha

Bad drivers, it just seems like in Toronto it’s getting worse every day.

What is your musical guilty pleasure?

Fancy by Iggy Azalea. I’m not a fan but that song is fire.

How do you spend your free time?

I just got a dog! His name is Waldo, so I’ll spend time with him/take him for walks (which you don’t realize how much you don’t do until you have a dog). I like to check out local acts and jams that happen in Toronto (and there are quite a few great ones). I’ll also use my free time to practice bass or guitar or write.

And last but not least, do you have anything you want to say to your fans?

Thank you so much for listening and for your continued support. It sounds cliché but I wouldn’t be able to do this without any of you. Keep supporting local artists and keep helping to grow Canada’s arts/music scene. You guys are awesome.