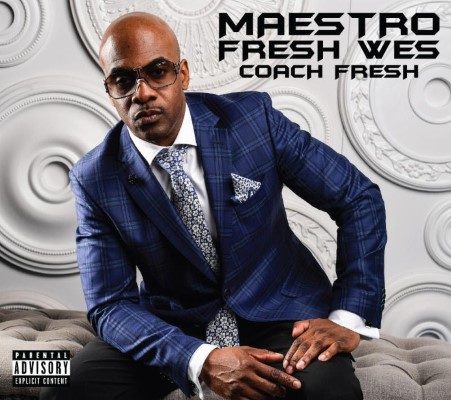 One Line Review:  The iconic “Godfather of Canadian hip-hop” Maestro Fresh Wes has created the album the grade eight backbone slidin’ kid in all of us has been waiting for with his newest release, and all-star guest party, Coach Fresh.

Full Review:  Icon is a term often misused, or overused, in the entertainment industry.

Performers, whether it be on television, film, or music, are quick to label themselves, or have their PR company do it for them,  as “icons”, or “legendary”, or the “next big thing”.  To be considered an honest icon, or legend, is to have not only have created a substantial, groundbreaking impact in your respective field, but to sustain that career, to continue to build your established fan base while being artistically sincere, staying relevant, and being brave enough to take creative risks, or to attempt various venues, to accept challenges pressed upon you by budding trends and clichéd movements.

Maestro Fresh Wes is iconic in all aspects.

Growing up in the late 80s, wearing a white jacket to my grade 8 “Farewell Ceremony”, I was jamming out to “Let Your Backbone Slide” pulling out whatever lame arsenal of white boy dance moves I called upon when needed.  (I was a marching band kid, so my timing was amazing despite my awkward executions.)

“Let Your Backbone Slide”, Maestro Fresh Wes’ first, at least to these ears, commercial hit was a game changer, a song that was intermingled and played at middle year and high school dances between Young MC , Rob Base, and Salt ‘n Pepper.  (I’m still not sure how “Push It” was repeatedly played at my grade 7 and 8 dances, but that is a story for another time, I am sure.)

The thing was with Maestro Fresh Wes, and this is the only way I can think of saying it, was he didn’t seem like, or sound like, a Canadian music act.  Here is where everyone gets their back up and chaotically yells “You do realize you write for CANADIAN BEATS, right!?!”

Of course, dear reader, but at that young age, myself and music video culture,  the Canadian singers or bands were easier to spot; the videos weren’t as sharp, the tunes seemed “nicer.”  There was this “Canadian air” about Canadian music, at least commercially, as the “lesser than” version of its American counterpart.  It can be argued that our commercial music may have had more in common with some European countries of the era, but with the big ol’ U.S. of A. right below us, it always became the point of comparison.

But then came Maestro Fresh Wes.

His single was interjected around the coolest, funkiest, rap-iest dance songs of the time and it not only blended in, it stood out, it surpassed its American counterparts in astounding, Superman Canadian-created leaping manners.

His voice was slick with a raw edge, his rhymes on point, his beats were that perfect combination of old-school foundation with clever samples.  In a time when rap was hitting mainstream, whether streetwise or studio-glossed, Maestro Fresh Wes was on the forefront paving a way for smart rap and hip-hop that could be commercially successful.

Why all the talk of yesteryear and the single that made Maestro Fresh Wes a professional name?

Because his new album Coach Wes continues that tradition, a solid record from front to back of slick, raw tunes with old school beats and clever samples.  Maestro sounds as fresh as ever, (eye rolling at obvious pun allowed) filled with social commentary, love, loss, grief, adoration, oppression, survival and a plethora of other themes approved by your cool as f*** high school English teacher.

The album kicks off with “Put Ya Guard Up,” an attitude-filled, sharply executed, call-to-arms against fakers, haters, and general negativity, the ones who can’t believe people can do what they can’t do.

“Coach Fresh” has a Cypress Hill vibe using sports metaphors and Canadian references. Who else can drop Don Cherry in a rap tune and have it be cool?  Here the Maestro, teacher, and coach, is telling suckers how he’ll “put them through the test” and influencing newcomers to be a “father figure to follow.”  “I’m not a rapper / I’m an icon / don’t get it confused” runs down the song establishing, and reminding, every one of his lofty title.

“TO Icon” is next, a West Coast slow drive expounding the grit and determination it takes to become an icon going to “Mr. Evans”, a social commentary on fatherhood, race relations, neighbourhood disillusionment, and biased press coverage.   Arrangement wise, the opening ostinato motif on “Put Your Guard Up” closes “Mr. Evans” creating a sonic bookmark, a sense of closure and cohesiveness, a running theme how each song is its own section in a larger, collected story, an anthology of independent tales with common themes.

“Tuition” tackles broken homes, and dysfunctional relationships. Here at the end of “Tuition” is another bookmark, a reprise reminding listeners of the connectedness of the album.

“Tomorrow Never Promised” and “The Distance” change the tone of Coach Fresh, both tunes having inspirational, uplifting closings, a reprieve from the previously established energy and intensity.  Of course, the reprieve is a set-up for the chaos of a notable guest appearance, to be mentioned a little lower, preaching from his rock ‘n roll pulpit, an ever-suitable, growly voiced hype man to get prepare the audience for what’s to come.

And not be left out of any all-star-guest-party appearance, the Cadillac man himself, White Chocolate,  Cocoa Butter, born a lion and the master of the Lovercall,  Danko mutha-effin’ Jones!  I think a new instalment of the Dear Danko Jones letter series is in order…

Anyone else, you may ask?  Who else could be added to the sheer multitude of groundbreaking, innovative, and original guest artists?  Let’s add Dr. Octagon himself, Black Elvis, Dr. Doom, Kool Keith of the legendary Ultramagnetic MC’s, that’s who!

Based on the pedigree of groundbreaking, influential, multi-faceted performances alone, this record is a must have for any music fans collection.

Maestro Fresh Wes’ new album Coach Fresh is available everywhere Nov. 17th, 2017.  Follow Maestro Fresh Wes on Twitter, Facebook, and Instagram, catch him playing the role of Paul Dwyer on Season 7 of the award-winning series Mr. D on CBC Television, or one of his many public speaking gigs including the previous TEDx Talk in Vancouver.