Our Lady Peace and Matthew Good to tour in 2018 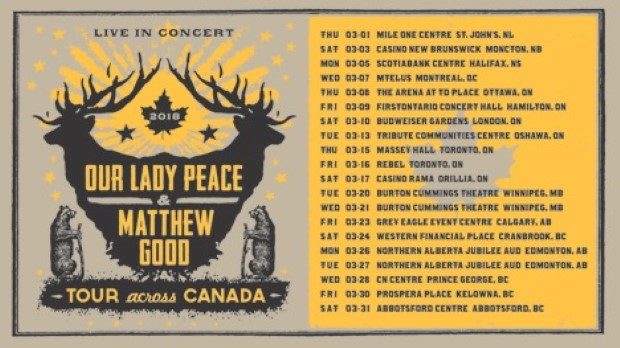 In a strange twist of fate leaving Canadian music fans of a certain era both scratching their heads and head-over-heels excited, ‘90’s icons Our Lady Peace and Matthew Good are joining up to tour the country in March 2018.

Beginning on March 1 in Newfoundland at St. John’s Mile One Stadium, the tour will take OLP and Good through 18 cities in nine provinces; and conclude March 31 in Abbotsford, BC.

The tour comes on the heels of new releases from both artists. Good’s eighth solo record, Something Like a Storm, was released in October and includes the singles “Decades” and “There is the First Time.”  Our Lady Peace are in the midst of a double EP release, with Somethingness Vol. 1 released in August, and Somethingness Vol. 2 scheduled for release in early 2018.  Their latest single, “Drop Me in the Water,” features a music video starring YouTube personality Matthew Santoro.

Tickets for the shows will be available at www.matthewgood.org/shows and www.ourladypeace.com, with VIP options available.  In addition, the artists are teaming up with Plus 1 to donate $1 from each ticket sold to War Child.