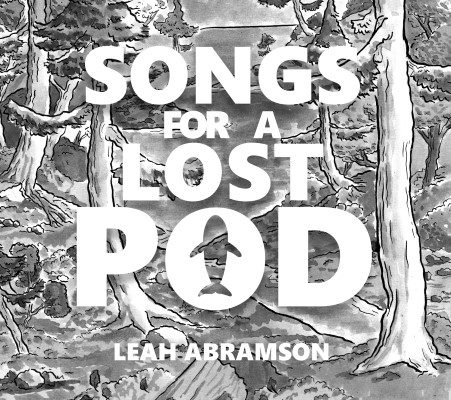 In what could quite easily be among one of the most creative releases from 2017 is Songs For A Lost Pod, the fourth album from Vancouver based singer-songwriter Leah Abramson.  The album follows the perspective of different species of whales who face the destructive environmental threats from human kind on a daily basis.  In this regard, Songs For A Lost Pond is both a concept and a protest album, but this is where things begin to get unprecedented, as she also sampled whale songs and manipulated them in the studio to use as beats and other musical elements.  Furthermore, the album serves as a companion piece to a graphic novel of the same name, both of which were written and composed by Abramson for her Masters OF Fine Arts thesis at the University of British Columbia and is illustrated by Taylor Brown-Evans.

The album opens with “Pilot Protest”.  Co-written with J.J. Ipsen, the lead single is the most pop-driven on the record as it tells the rather dark story of pilot whales intentionally beaching themselves to send a message to humanity.  The song uses a variety of weaving guitars, soothing synths, electronic percussion, and Abramson’s breathy and high vocals.  Throughout the course of the album, it is Abramson’s vocals that shine the brightest and her use of rich vocal harmonies layered upon each other gives her songs a sense of fullness.  While heard throughout most songs, this is most notable in “Pender Harbour” a track that- with the exception of a minimalist piano and some ambient synths and guitars- the song is entirely based around her vocals.  “The Lost, The Gone” also stands out as one of the strongest tracks on the album as well as the strongest example of sampling the sounds of the ocean and the song of its inhabitants into an ambient and avant-garde manner that is truly original.

That being said, this is really the only song that achieves this and is the only song that sits in the avant-garde territory, making it feel like a strange choice for an album closer.  Much of the record demonstrates more of a singer-songwriter vibe with hints of indie pop to it and, albeit while more artistic than many of her peers, does not quite fit such an avant-garde identity.  Unfortunately, the whale theme, without having read the premise of the album, feels difficult to grasp from the music, making “Hey, Hi, Hello”-what I imagine to be the prelude to “The Lost, The Gone”- fall flat.

Songs For A Lost Pod is a mixed bag.  While the message and themes of the record are certainly ones that need to be voiced, elements that seemed like sheer ingenuity on paper- the use of whale sounds to create soundscapes for Abramson to build her songs on top of- seemed less groundbreaking upon actually hearing.  This is partially due to the mixing process which sometimes leaves these sounds buried, or rather quite oppositely, the whale sounds are not blended in enough.  Rather than being integrated within the music (with the exception of “The Lost, The Gone”), they often take the form of ambient textures that is the equivalent of hearing live applauses in a song.  There is nothing wrong with it by any means, but there also isn’t much special about it.  Forgetting about the album’s premise, Abramson has written a collection of eight songs that are well written and performed with an array of excellent vocals but also does not quite make waves beyond what other singer-songwriters who dabble in pop are releasing.  While Songs For A Lost Pod is not a bad album, where it boasts such an ambitious premise, it leaves you longing for a far more original and exciting listening experience.