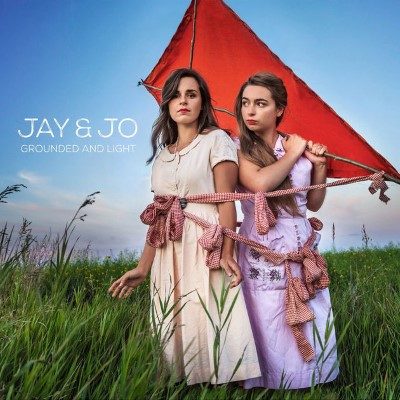 Full Review:  In two short years, Jay & Jo have been busy playing venues across Canada, were featured in the Roots Café for the 2016 SCMAs (Saskatchewan Country Music Awards), nominated for Roots Artist of the Year at the 2017 SCMAs, and, in the summer of 2017, were “train car” musicians on VIA Railway, sharing their distinctive sound with people from around the world as the travelled the rails across Canada.

Jay & Jo (Janaya and Jolissa Trudel) are a vibrant, dynamic sister duo settled in the heart of the Saskatchewan prairies creating an organic, truly honest sound with sparkling harmonies, tasteful musicianship with a lyrically keen introspective, yet outwardly observing eye.

With their debut album Grounded and Light, vocalists, songwriters, and multi-instrumentalists, Jay & Jo offer a new voice in the traditional folk/roots/country scene with well-crafted songs, splendid harmonies, and sparkling personalities that are felt through their music.

To make the album even more of a family affair, “The Trudel Boys” help with stomps and claps, and Janice Trudel appears as a guest vocalist.  Music definitely runs in this family!

The title Grounded and Light ties into a consistent theme throughout the record as listeners are treated to songs that are “light” in mood but “grounded” in soul, songs of laments and praise, heartbreak and togetherness.  The cover art plays with the theme as well, with Jay & Jo being “grounded” by an overly large kit, to freeing themselves in whimsical style in the insert, to having the kite take flight on the back cover art.  Grounded and Light is an album to help one’s spirit soar or play on repeat traveling across the Trans-Canada Highway.

The third track on Grounded and Light is an example of the dichotomy of weight and lightness, earth and sky, the pairing of two creating one relationship.  Here in “If I Were”, listeners have a narrator who is exploring the comparison of how two people fit together, how their separate beings can be entwined to create an emotional balance:

But if I could be a rock and you a kite

we’d be tied to each other safe and tight

I would keep you grounded

But the weight changes, as the narrator reveals, their bind is not a strong, and, instead of being a perfect balance of “grounded and light,” it no longer exists:

But I’m not your rock

I’m not your wife

can’t give you anything

can’t give you my life

though I wish I could

my love, this is goodbye

Here is a microcosm of the album, constantly playing with emotional weight and emotional lightness, the joy of connection and the grief of loss.

On “The Roadtrip Song”,  the album opens with accordion, pedal steel, brushes, guitar, and ukulele, creating a nice, relaxed drive, with space for motion and pulse, yet unhurried; a road trip without emergency but of relaxed self-discovery.  An intimate connection is created from the start, as the lyrics seem auto-biographical and open: “Hey sister/we’ve been talking’/bout this for a while/time to get ourselves/a set of wings and fly.”  Everyone is invited to hang out in the back seat and listen as Jay & Jo talk and sing taking their respective backseat audience on their upcoming adventure.

Self-awareness and emotional developing is discussed in “Firefly’s Lament” where the narrator notices a pattern in personal interests: “Fast cars and mason jars/ they’re all the same to me / Why does it take so little to sweep me off my feet?” continuing she is “easy to catch, hard to satisfy.”

In “Grey Sky”  the narrator succinctly points out “you don’t believe your daddy’s strong / until you see him cry” ranging from matters of the heart to matters of awareness, the continual range of self-discovery and empathy, the change of focus one develops with age, experience, and life, no matter how long, or short, that life is.

“Brother” is moody and haunting, Bonnie Raitt and Norah Jones driving towards far-off lightning strikes, the moon swallowed by storm clouds, a Black Rider trailing in the distance.

From here we transition to “Homesick Heart,” an endearing “non-road trip” song, a song of longing for ones place in the world, wherever it may be, considering perhaps, by going back to where one came from, by going back to basics, one can find who they truly are among the everyday bustle and society’s distractions.

Discussing the production of Grounded and Light, producer, designer, and percussionist Hal Schrenk took the same production approach as the first Tracy Chapman self-titled album.  “With Tracy Chapman’s first record,” says Schrenk, “they recorded the album as an acoustic album, then built the production around the original recordings.  What made that record so dynamic, like this one is the sense of the true performance of [Jay and Jo] with instrumentation that fits each individual song, we weren’t tied down to any one instrumentation or sound.”

The bonus track closer is “Cantaloupe Heart” an acoustic ukulele vocal piece reminiscent of a younger Joni Mitchell in delivery, and an intimate/close to mic recording.  There is a tag to the end of “Cantaloupe Heart” which I will not spoil here but is one of the sweetest moments put to tape.

Jay & Jo have created a breathtakingly endearing, traditional, and modern roots/folk/country album with their debut album Grounded and Light.   Enjoy your travels!