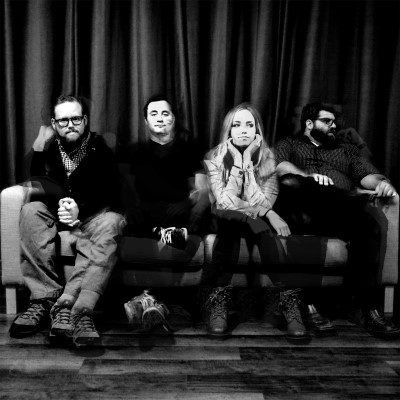 We had a chat with Edmonton based pop-folk-rock band, Soft March during the latest segment of Five Questions With. Soft March will be releasing their album, Farewell Party on November 25, and they have just released a lyric video for their single, “Dragonfly” yesterday, so be sure to take a look at that below, and check out our interview with them.

Soft March started in 2013 when I (Joel Kleine, bass) contacted Paul Jensen (vocals, guitar) to help finish writing a song that was to be entered into ATB’s All Alberta Songwriting Contest.  Our entry, “QEII”, ended up in the final 8 out of 130+ entries.  That was the kick in the pants we needed to start writing more songs together.  We spent a couple years writing tunes off and on, and finally, in early 2016, we started performing as a duo.

At a regular Sunday night open stage, we met drummer Tanner Onciul.  We’d been looking for a drummer who’d be up for trying new things percussion and dynamics-wise.  The three of us started jamming and performing small shows within the month.

That summer, we enlisted the talents of Rachel Gleddie, singer, and multi-instrumentalist, who rounded out the songs with harmonies and anything else we needed — a second guitar, glockenspiel, percussion, etc.  I’d known Rachel for quite some time as I was one of her elementary teachers many, many years ago.  Some aspects of that were a little awkward at first, but we quickly got past that.

Over the last year, we’ve been a part of some super fun shows around Edmonton and recorded our album at a home studio.  Over the winter, we hope to write some new tunes and hopefully snag some festival spots in the spring, summer, and fall of 2018.

We describe our music as “happy songs about sad things”.  The tempo might be upbeat, the chords are major, but the lyrics often start from a place of discontent.  Our song “I Hate This Time of Year” is a good example of that.  The chorus melody is pretty uplifting, and lyrically it might be hopeful, but it’s by no means a peppy song.

For the most part, songs start with one of us coming in with a lyric, or a verse and a chorus, an overall idea, and we piece things together with each others’ input.

It would be hard to choose a genre that we fit into — we’re part folk, rock, roots, alternative, etc.  We focus on melodic hooks as much as we can, whatever form in which those arrive.

We have two exciting shows coming up in Edmonton!  November 18 we’re opening for Skydiggers at The Needle Vinyl Tavern.  I first saw Skydiggers in 1991 opening for Blue Rodeo and have been a huge fan since, so I’m honoured to support them in this way.

A week later, on November 25, we’re releasing our cd ‘Farewell Party’ at The Aviary.  We’re joined by Danielle Dayton, who is also releasing a cd, and opener Justine Vandergrift.  We’ve been recording our album ‘Farewell Party’ over the last year, so it’s a relief to finally have it finished and out there for people to hear.

I think our live show is just down to earth.  No queued synth parts, programmed drums, or backing vocals.  We’re four people playing songs as best as we can.  In an effort to keep things somewhat unpredictable, we change up the tempo and instrumentation throughout the show. For our upcoming shows, we’ve got Grace Miazga joining us on vocals and violin which is sounding really gorgeous. Although our album has a few songs with violin on them, it’s been great to hear it on other tunes too.

Let’s start where we started, “QEII”.  It has good hooks and a chorus you can sing along too.  Anybody who’s traveled apart from a loved one can relate.  A friend of mine recorded the violin part for our album and his part really solidified the tune for me.

There are so many!  I’m very excited for Bahamas’ new album out next year. His other albums are staples in my listening diet.  Other Canadian artists that influenced our upcoming album include Jason Collett, Blue Rodeo, Skydiggers, Joel Plaskett, John K. Sampson, Sloan, and so many others.