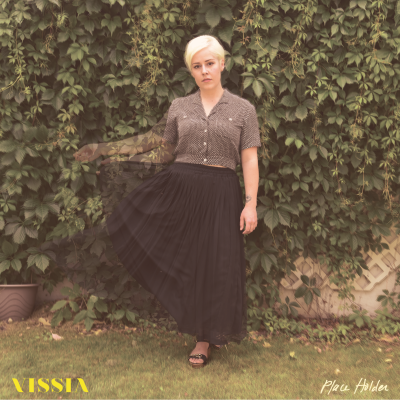 Folk-rock artist VISSSIA‘s latest, Place Holder, is a compelling photo album as well as a musical one. Every song captures individual moments from the last four years- faded by time but vibrant in memory. The Edmonton-based singer entered the Canadian music scene with her sisters as a country-folk trio in 2000, performing around the country until she declared her solo career as Alex Vissia in 2011. Although this is her third independent work, it appears unprecedented and she’s changed her stage name for a fresh start. The album was released by her recently-launched label, Hurry Hard Records. All the circumstances are aligned for VISSIA to show off her newfound image.

The album cover is, of course, a full body shot of VISSIA. She stands in front of a leafy garden backdrop with a neutral expression, her arm blurred as though it’s moving. Her songwriting is as candid as the photograph. “You say that you’re leaving soon, there’s nothing left for you but pushing on pull doors, singing your blue and purples and reds like the days going down”, she sings about a cycle of lackluster days on “Macondo”. VISSIA is a subtly commanding soprano with a celestial tone. The clarity of her voice and effortlessly contoured phrases enhance her acceptance of life’s unavoidable ebb and flow.

Despite the prose that VISSIA writes, her music doesn’t rely on the lyrical content to speak. “I Wanted” employs active bass lines and crisp drumming to mirror her heart-racing desires. She contrasts this with tracks like “Make Her Stay” and “You Should Be Sleeping”, which feature reverb-drenched surf guitar for a laid-back commentary on her uncertainties about love, life, and timing. On the standout track “The Kind of Good”, I was initially surprised by the simple guitar progressions. When she enters, the stripped-down accompaniment soon reveals her most honest sentiments yet- the ongoing loneliness she experiences.

Place Holder is a colourful assemblage of VISSIA’s realizations when embracing the unknown. She’s matured graciously as a musician, now uniting her talents and poetic instincts.There’s no question that we’ll be pulling these snapshots out to admire again and again.