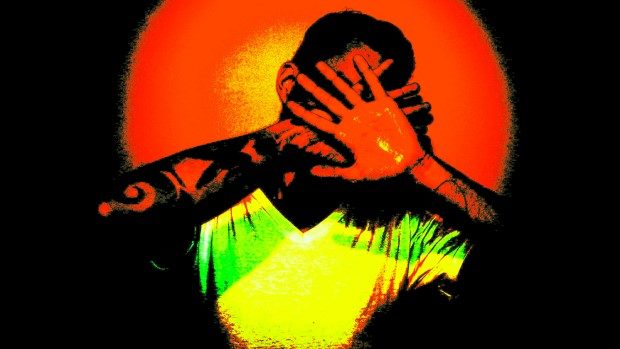 Toronto’s own Big City Cough has recently released their new album, Born At Night. We’re happy to share the album with you, along with our newest segment of Five Questions With! Check them both out below!

When we asked Big City Cough about the album, we got this response,

“The album title came from the fact that I’m a night owl… I tend to burn the midnight oil all the time, and the creation of the material and sometimes the execution of the recordings was in keeping with that. Most of it was conceived in the middle of the night. Maybe it’s the musician in me… although one time my Mom said to me “You know you were born at night, right??” Maybe it’s in the core fibre of who I am. I was born at night, and so were the songs.”

Hello readers! I’m Sean Beresford, AKA Big City Cough when I’m making music. I coax unusual sounds out of an acoustic guitar and some other devices with aims at aural gratification.

Big City Cough music is instrumental finger-style acoustic guitar music, mixing both traditional-sounding melodies and unusual experimental, ambient soundscapes. I’ve usually been “someone else’s guitar player” which has been great, but I picked up the acoustic a while back and learned finger-style and some songs came out, typically in the middle of the night. Hence the album title ‘Born At Night’. I have a basic home-studio setup, so I just capture things as-they-happen and go from there.

Yes, I am playing every Tuesday in November at the Dakota Tavern in Toronto from 6-9pm for the release of ‘Born At Night’. The live performance involves me playing a few tunes by myself and then inviting some very talented friends up to play pedal steel and violin. Other special guests will probably show up too. There’s a different awesome opening act each night also. The vibe is quiet & mellow. Some have called the Big City Cough set ‘introspective’. It kinda takes you away from the hustle & bustle of your brain / out in the world, at least for awhile. I’ve played in many loud rock-n-roll & punk rock bands, but this project is kinda the opposite of that.

“Before This There Was Everything” was released mid-October as the lead single from the album, and it’s a good way to get in there, I’d say.

So many… Simone Schmidt is a favourite, in whatever vehicle she is in (‘Fiver’ and ‘The Highest Order’). My good friend Michael Eckert played the pedal steel on my record and has a very cool duo project called Masaru. Whitehorse are amazing. The Sadies are awesome. U.S. Girls, Darlene Shrugg, The Cosmic Range… I could go on & on!