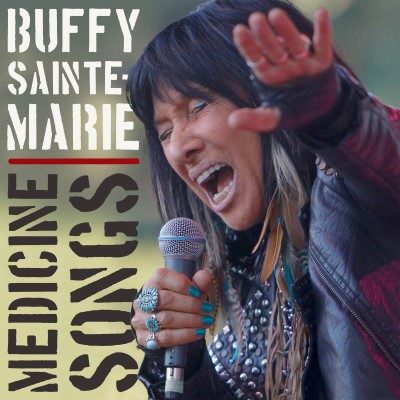 One Line Review:  In a career spanning over half a century, Buffy Sainte-Marie has created a fresh, relevant, sonic social criticism with her newest release Medicine Songs.

Full Review:  Pursuing an artistic vocation is not a conventional, or easy, career choice.  High school career counselors are not known for pushing their eager, artistic students into the world of professional artistry.  A lengthy artistic life is not guaranteed, with many artists, in whichever respective field, have difficulty sustaining substantial creative output, fizzle out as they age, or do not rise to notoriety until after their untimely, tragic demise.

Since her groundbreaking debut, It’s My Way! in 1964, Buffy Sainte-Marie has not allowed the status quo, or prevailing social norms, to define her.  Sainte-Marie’s back-catalogue is impressive in depth, and in scope, from creating one of the first electronic vocal albums in the 1960s, as an active cast member of Sesame Street in the 1970s, being the first indigenous person to win an Oscar in the 1980s, and, during all this time creating music and artistic endeavors, was blacklisted by American Presidents Richard Nixon and Lyndon Johnson, as well as FBI Director J. Edgar Hoover, for good measure.

Despite her high-powered political critics, Sainte-Marie’s accomplishments include numerous Honorary Doctor Degrees, four Juno awards, a Gemini award, a Golden Globe award, a BAFTA award,  a Governor General Award, a Polaris Music Prize, induction into the Canadian Country Music Hall of Fame, a star on Canada Walk of Fame, and the Order of Canada.

Let’s not forget releasing 17 studio albums which led to her acclaim in the first place.  All of this during generational and culture changes, when other popular music stars are being continually inducted into the 27 Club.

With this legacy, one could rest on their laurels and tour past albums, keeping their name in the media and public eye by touring a classic album or recreating many incarnations of a Greatest Hits record.

Medicine Songs is the follow-up to the Polaris Music Prize, and JUNO Award-winning, 2015 album Power in the Blood, released November 10, 2017, through True North Records, a powerful, relevant, contemporary album, touching upon present-day issues with a sound that is simultaneously fresh and true to Sainte-Marie’s musical and artistic voice.

Discussing the new album, Sainte-Marie says Medicine Songs “is a collection of front-line songs about unity and resistance – some brand new and some classics – and I want to put them to work. These are songs I’ve been writing for over fifty years, and what troubles people today are still the same damn issues from 30-40-50 years ago: war, oppression, inequity, violence, rankism of all kinds, the pecking order, bullying, racketeering and systemic greed.”

The choice to re-record some classic Sainte-Marie songs was not taken lightly as “some of these songs were too controversial for radio play when they first came out, so nobody ever heard them, and now is my chance to offer them to new generations of like-minded people dealing with these same concerns. It’s like the play is the same but the actors are new.”

The album opens with the lead-off single “You Got to Run”, a tune with an eager urgency and driving energy.  Opening with Inuit throat singing by collaborator Tanya Tagaq, the Inuit experimental vocalist, throat singer, and artist, who recently won the Polaris Prize for Best Canadian Album in 2014, creates an immediate, natural pulse to the song rooted in tradition framed with a cleanly produced, modern rock anthem.  “You Got to Run” is unapologetic, a rally cry for everyone to stand tall, to take arms for whatever cause, and demand the rights, freedoms, and equality that should be available to all.

And this is track one.

Unflinching, critical and aware, Sainte-Marie discussed the issues facing aboriginal peoples in the directly honest “My Country ‘tis of Thy People You’re Dying”, a title that sounds like a wonderful companion piece to e.e. cumming’s “next to of course god America i”.  The song is biting, unflinching, and as classic as any Bob Dylan protest song:

And where does it tell of the starvation hell.

As the children were herded, and raped, and converted?

And how do we comfort the missing and murdered?

My country ‘tis of thy people you’re dying.

Originally written in the 1960s, it is as relevant, and unfortunate, now as it was then.  Sainte-Marie describes the song as “Indian 101 for people who’ve been denied the real history of how Indigenous people in North America got to be in the tragic states of affairs most suffer today […] I wrote [My Country ‘tis of Thy People You’re Dying] before people used the word genocide or acknowledged the indigenous holocaust of the Americas or the horror of residential schools.”  One part spoken word poetry, one part historical criticism, “My Country ‘tis of Thy People You’re Dying” should be included in the canon of must-hear social activism music.

“America The Beautiful” is a tender recreation of the original Katherine Lee Bates and Samuel Ward song, with new sections added by Sainte-Marie, and “Carry it One”, a motivational, uplifting anthem that Saint-Marie says, “reboots me and sets me straight, whatever’s going on,” while “Little Wheel Spin and Spin” is haunting and tender, with a discretely placed shaker in the back of the mix, subtly pushing the song continually forward.

“No No Keshagesh” is a gritty dance, rock song comparing environmental imbalance to “Keshagesh,” meaning greedy guts in Cree, a puppy who eats all of his supper then wants to eat everyone else’s as well.  Tegan and Sara should cover this song for an environmental awareness fundraising album.

Trying to surmise Medicine Songs without a track by track description is a feat, given the grand scope and arrangement of the record.  By now, using these select examples, it should be clear the extent of influences and deliveries in Medicine Songs, having multi-genre music accompanying Sainte-Marie’s distinct artistic sound and vision.

Medicine Songs is a powerful follow up to Power in the Blood with inventive, stunning production, skilled musicianship, poignant songwriting, tasteful performances, and more heart than one expects from a modern rock/roots record. Power in the Blood and Medicine Songs are a powerful one-two combination, two rich and lush records that any artist would be hard-pressed to create once, let alone twice.

Medicine Songs is tough and empowered, non-apologetic and bitingly honest.  The album is diverse in style and production while retaining Sainte-Marie’s voice; every song is sincere, unflinching, and poignant, displaying an artist who shows no intention of slowing down.

When many musicians and artists settle into their career, Buffy Sainte-Marie is as strong and relevant as ever, making her distinct voice rise over the clatter of conformity and apathy.

Listen to Medicine Song and experience one of the best new albums of 2017!