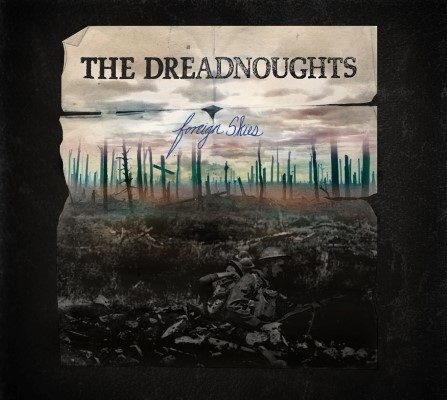 Hailing from Vancouver, The Dreadnoughts are back after going on hiatus in 2011, following their last release Uncle Touchy Goes To College. Originally forming in 2007, the band has released numerous EPs and albums. They are now back with the same hard hitters as usual on their new album, Foreign Skies.

The first single from the album is “Black and White” and can be heard on their Bandcamp page. The song has a slower folkish opening before kicking into its gypsy-punk styling, with influences streaming from Gogol Bordello and Rancid. Vocally the track was a favourite for me, the balance between the softer spoken vocals and the heavier styles of gypsy-punk caught my attention and made me want to actually go listen to the album fully from start to finish numerous times.

“A Broken World” is the shortest track on the album featuring a keyboard and string instruments. This song is more of spoken word track to help ease into the following track “Black Letters”. Having an instrumental interlude definitely kept me on the edge of my seat, hoping for a heavier hitter to end the album.

“Back Home in Bristol” ends the album with you wanting more. The track similar to the rest of the album brings out various elements of accordions, violins, mandolins, banjos but with heavier punk twists. This track was personally a favourite and with it being the last track on the release, it made me want to go back and re-listen to the album every single time I heard it.