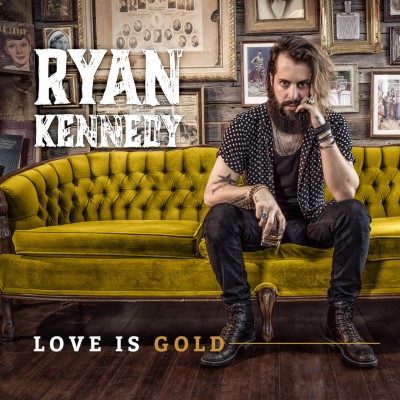 Ryan Kennedy released his full-length sophomore album, Love Is Gold on October 6, 2017. Kennedy who originates from Morin Heights, Quebec released his debut album Home Fires independently in 2015. Kennedy had a successful run on 2016’s edition of La Voix. Known for his stellar renditions of songs such as Bruce Springsteen’s “I’m On Fire,” Bob Dylan’s “Like a Rolling Stone,” and even Tracy Chapman’s “Fast Car,” Kennedy was quick to become a fan-favourite during his time on the show as part of Pierre Lapointe’s team.

After his departure from La Voix Kennedy put pen to paper and went to work on his latest album. Love Is Gold is a collection of some of Kennedy’s most autobiographical lyrics and a showcase of his vocal skills. The album contains two French-language songs; “Je cours toujours” and the French version of his song “Morin-Heights.” As a singer/songwriter, Kennedy makes his best connections through music. With soul and creativity, Kennedy’s music separates him from the rest of his peers with his pure and raw emotion. A testament to how Kennedy’s music can touch his fans, the video for “Honest Song” has earned him thousands of views on YouTube alone.

The 12 track album is a great blend of different musical elements and genres. Kennedy draws on inspiration from his life and his biggest influences. With some retro sounds and the concise ease in Kennedy’s vocals, you can get lost in his music. Love Is Gold opens with the title track. You can’t help but be hooked on Kennedy’s style from the first time you hear his music. One of my favourite tracks on the album is “If I’m Lost.” I love the haunting and emotional performance Kennedy gives on this track. You can hear throughout the album Kennedy’s musical passion and his creativity. Love Is Gold is definitely an album you will want to give a listen to and add some Ryan Kennedy to your next playlist.