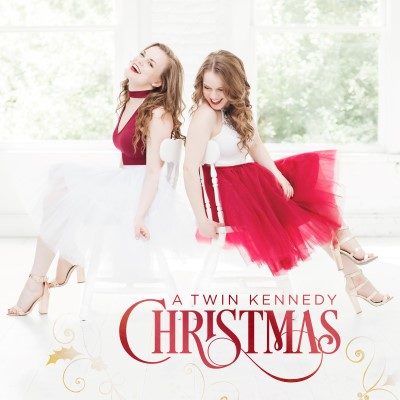 With the magical season of Christmas right around the corner, country duo Twin Kennedy (comprised of sisters Carli and Julie Kennedy) have released a little holiday spirit with A Twin Kennedy Christmas. The nine track holiday inspired album is a balance of well-arranged Christmas classics and thoughtful holiday originals. “Christmas is our favorite time of year! It has always been a dream of ours to record a Christmas album. We are so excited to share this new collection of both original holiday songs and our own arrangements of many holiday classics we love. We hope to become a part of our fans’ Christmas celebrations every year with A Twin Kennedy Christmas!” explains the duo.

A Twin Kennedy Christmas was recorded in Nashville, Tennessee and features the talents of Grammy award-winning group, The Time Jumpers. Twin Kennedy co-produced their record with Nashville’s Dustin Olyan.  Writing with some of music’s finest such as Joe Doyle, Brian Donkers, and Steve Rivers proved to be fruitful as Twin Kennedy’s originals are just as good as their own versions of beloved holiday tunes. The lead single “Cold Weather” is set to be available to Canadian country radio just in time for the holiday playlists to start spinning. “Cold Weather” is about all of the seasonal things we love and enjoy like romance, snow, and everything in-between. The duo is incredibly dynamic as their vocals take you away through a “wintery fairy land” of love, music, and all the sounds of the season.

Also included on A Twin Kennedy Christmas are Christmas staples such as; “Have Yourself a Merry Little Christmas,” “It’s Beginning to Look a Lot Like Christmas,” “I’ll Be Home For Christmas,” and “Silver Bells.” In addition to the lead single “Cold Weather,” the duo cooked up some new holiday favorites with their originals “Snowed In,” “I’m a Child Again,” and “Not So Silent Night.”

With so many wonderful holiday albums and songs already extensively produced, A Twin Kennedy Christmas actually adds to the huge catalogue of holiday music. The duo has great vocal harmony and chemistry. Their versions of the classics are unique to their own style and offer a fresh and sweet sounding new experience of each song. With subtle changes and new arrangements, they make these tired old Christmas songs, sound brand new right alongside their originals. A perfect and seamless musical blend throughout.

Twin Kennedy has been busy and has toured extensively throughout Canada and the US since the release of their debut album It’s a Love Thing. Their debut album was produced by fellow Canadian country artist George Canyon. Known for their uplifting and energetic live shows, the duo will be hitting the road once again for their A Twin Kennedy Christmas Tour.