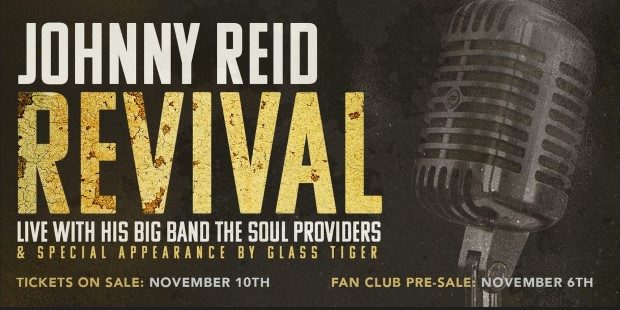 Johnny Reid has just announced a brand new and extensive tour that he will embark on in 2018. The national tour currently has 40 plus dates that will take Reid coast to coast on his 2018 Revival Tour. The Revival Tour will consist of Reid and his long-time road band, The Soul Providers as well as Grammy nominated, and Juno award-winning group Glass Tiger are scheduled to make special appearances on the tour.

The new tour is in support of Reid’s latest studio album Revival which was recently released on November 3, 2017. The album contains 13 new tracks including the song “Soul Train” which has been making rounds on social media with Reid’s fans. The soulful new album is available everywhere now via Universal Music Canada and major music retailers.

The 2018 Revival Tour will kick off on February 26, 2018, in Sidney, BC and then will continue on throughout the country for three months. Reid’s Tartan Army Fan Club will have first access to pre-sale tickets. Tickets for the2018 Revival Tour go on sale today.