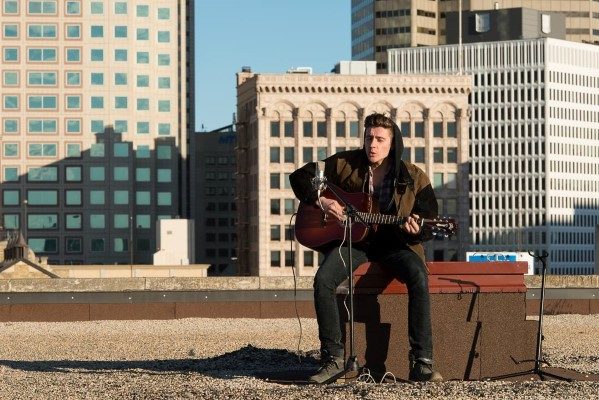 Winnipeg, MB based singer/songwriter, Skylar Bouchard recently release his debut EP entitled Tired of the City. We were happy to have the chance to speak with him about that, and so much more. Enjoy!

First of all, care to introduce yourself to our readers?

I’m Skylar Bouchard, a singer-songwriter from Winnipeg and I just released my debut EP “Tired of The City”.

Congratulations on the release of your debut EP, Tired of the City, care to shed some light on the creation process of the album?

Thanks so much. It’s been a great learning experience. It was the first time I’d been in the studio to record my own songs so it was eye-opening to see what it takes to bring a song to fruition.
Also, I’m lucky to have some incredible musicians as friends so it is special to have them on the record.

Is there a specific song that you were anxious for your fans to hear?

To be quite honest, all of them. I can be a fairly high-strung person normally, but I don’t think I’ve ever been as nervous as when I opened that first box full of CD’s with my face on it.

You say that the track, “Montreal” best describes the tone of the album, care to elaborate on that?

A lot of the writing that I used on the EP is based around that age-old theme of “coming of age”. It wasn’t really deliberate, but “Montreal” really exemplifies that to me. Just because you don’t understand something and can’t fix it doesn’t make it easier to let go.

I find that I do most of my writing within my own perspective and based on personal experience, whether it’s romantic endeavours, friends I’ve lost or places I’ve travelled. I find it easiest to write almost autobiographically. That being said, if I’m ever blocked up I turn on some Lou Reed or read some Pablo Neruda and just jot down whatever comes out.

I read that you are inspired by many artists including Dan Mangan, Joni Mitchell, Ryan Adams and Neil Young, what about these artists inspire you?

They’re visceral and vulnerable. When they sing about heartbreak, I believe them.

I’m settled back in Winnipeg after the initial tour of the album. I’m gonna write and hibernate until early next year and then hit the road again to support the record. I’m excited, 2018 is shaping up to be a busy year.

What should someone who has yet to see you live expect from your shows?

Well, as you might expect, you’re going to hear a lot of sad songs, but I don’t like to take the whole experience too seriously, so I might crack some jokes and tell some of the outrageous, and sometimes embarrassing, mistakes and stories that I’ve collected to help me pen these songs.

I’ve been listening to Earthly Days by William Prince a lot lately. I remember when I started going to open mics in Winnipeg and there was this large man with his booming and velvety voice, spinning these thoughtful, intricate songs. I loved seeing him play then and I loved hearing that he took home a Juno earlier this year.

Last but not least, do you have anything you’d like to say to your fans?

I feel really lucky to be able to do what I do and I owe it to the people that support me. Much love to each and every one of you!