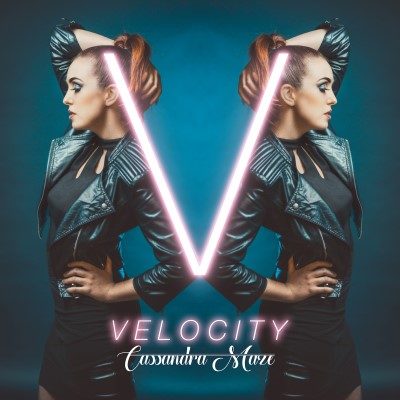 It has been a busy, yet exciting year for Vancouver based musician Cassandra Maze.  In February Maze released “Wait”, the first single from her debut EP.  Since then she has travelled across Canada to promote her talents by playing many shows, both acoustically and with a full band. Having found success with the release of this single through Canadian radio and online platforms such as Spotify, the October 6th release of her debut EP, Velocity, signifies the beginning of something amazing.

Maze created songs that will “ensnare you in a daydream and draw you to the dance floor.” The melodies include gritty synth layers that leave you wanting to tap your feet or sway to the beat.

According to Maze, the six songs on the EP are an indicator of where she’s been and what she’s experienced in her life. They are a road map of the past, which hints to the future.

The album begins with a reverb-soaked guitar riff to capture the attention of the audience. Maze describes ‘Wait’ as “a cautionary tale I tell myself whenever I start to feel lazy and want to quit.”  It definitely has a great message to it. We all have obstacles that we need to overcome and sometimes we feel that nothing will ever go our way. We all need to remember that eventually, things will work out in our favour.

Next up is ‘Perfect Storm’, a song about the celebration of the times when [Maze] felt truly loved and in love. The melody of this song seems to follow the path of the tail. There are quieter parts in the melody where the relationships are described. This is followed by louder, more exciting beats; an indication of the excitement one feels in a relationship.

‘Sea’ begins with a softer melody with increasing intensity signalling the emergence of change in the form of a melody that will definitely make you want to get up and freely use your best dance moves. This track, according to Maze, “pays homage to a friendship that dissolved and that I was never able to reconstruct.”

Both ‘Marry the Moon’, a song that “captures the longing we feel for something greater than ourselves,” and ‘Still Afraid of the Dark’, a song about an irrational childhood fear that most of us have probably experienced at one point in our lives or another, definitely gives me the dance club –nightlife feel. The use of synths and vocal effects throughout the tracks help to solidify this feel.

The last track on the EP, ‘Die Wondering’, has a darker feel to it; with a stronger focus on the vocals instead of  the effects.  According to Maze this track is one that “looks forward down this path and asks, ‘what might I regret?’” This is something that the audience can definitely relate to. We have all probably been in a similar situation at some point.

Before recording this EP, Maze had already gained experience touring internationally and providing vocal session work and keyboards for a variety of artists, including Victoria Duffield and Devin Townsend. She has also had some pretty impressive accomplishments with being a 2016 CBC Searchlight Top 10 Regional Finalist and some of her songs have been used in film and TV projects. The release of her debut EP, Velocity, is sure to add some amazing things to this growing list of achievements.