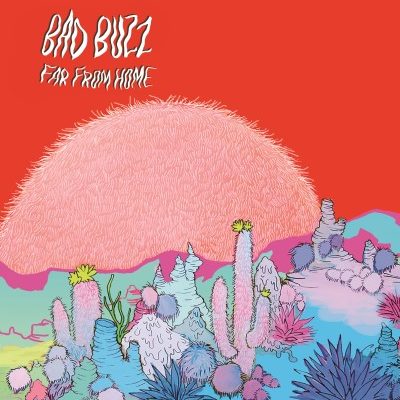 Following a year of tirelessly performing around Toronto and the surrounding regions, the city’s latest punk outfit, Bad Buzz, have released their debut album, Far From Home.

Opening with the crunching power chords and melodic lead lines of “Without You”, Far From Home grabs the listener, immediately pulling them in.  The song feels dark and the gravelly vocals only add to that, but what stands out most is the Bad Buzz’s use of rhythm and lead guitar tracks throughout much of the song, giving the song- and ultimately the band- a much fuller song.  This is a reoccurring technique that, by the end of the album, feels distinctive to the group’s style; whether it is the intro and rhythmic breaks in “Blocking Out The Light”, the sludgy intro of “Mindwaves”, or throughout “Slipping Away”, the album’s lead single.

What continues to make Far From Home an exciting album is the band’s unique songwriting voice that gives the album a wide sense of variety, making for an enjoyable listening experience, as well as giving the band a better sense of musicianship.  The title track is a prime example of this as it seamlessly blends a quiet, spacious, and subdued verse with a hard-hitting chorus that sounds as if they are from two different songs yet works so well together.  Of the records eight songs, however, “This Ride Tonight” feels like one of the strongest and most unique with its swaying 12/8 shuffle over thick distorted chords and ripping lead lines.

Far From Home is a unique blend of all eras of punk that is largely fueled by Green Day styled pop punk, Social Distortion, and a touch of The Ramones for good measure.  In this regard, Bad Buzz stands out immensely from much of the punk scene that exists today.  They play pop punk with a sense of integrity, maturity, and modernity that they do not quite fit in that scene traditionally, nor are they grimy and aggressive enough to be considered among modern punk’s rougher crowd.  In this sense, Bad Buzz is blazing their own trail through the modern punk scene in a way that is unique with an emphasis on evolving the genre.