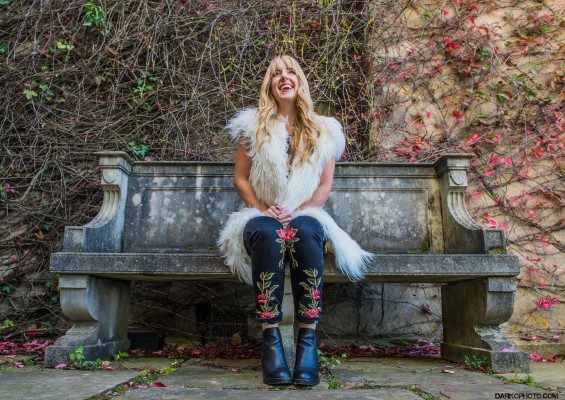 Music has been Melissa Bel’s passion for so long that she actually started singing before she could even speak! It’s no surprise, then, that upon completing high school, she chose a route out of the “norm” for an 18-year-old; she released her first album! Four albums later, the rest is a jazzy-vocaled, emotion-soaked, living-the-musical-dream history.

Your 4th album In The Light is full of instant “stick in your head” melodies! The newest single “Big Boys Don’t Cry” w/ a co-write by Justin Gray (Amy Winehouse, Mariah Carey, Joss Stone) is definitely included in that. When working alongside fellow writers, how much creative control do you like to have?

I almost always decide what the subject matter is we’re writing about because it has to feel genuine for me when I sing it. One of the beauties of co-writing is sometimes your co-writers can get ideas and emotions out of you that you didn’t even know were there. I like to take the reins with melody and lyrics for the most part, and love to sit back and let the producer or a more proficient musician than myself focus on chords and a beat.

The video for the single is so FUN and so relatable with your girl squad supporting you throughout the whole thing. Who have been your biggest supporters as your career as grown?

Definitely my parents. They’ve been behind me the whole way. When I was 17 they encouraged me to follow my dream of a music career instead of going to university, which was a really pivotal moment because without their support I probably wouldn’t have had the guts to go for it. They even flew over to England last year to be at the CD release party for ‘In the Light’.

The newest album spent time on the Canadian iTunes Top 200 Pop Charts reaching all the way to #49! Besides the chart growth and, in turn, even more fans, how would you say you have grown most since that first release back in 2009?

I’d say I now have the knowledge and motivation to take my career into my own hands and not wait for or expect, anyone else to do it for me. I had a decent amount of success right out of the gate with releasing my first album and getting signed to a label in Toronto shortly thereafter. I made the mistake of thinking it would all be that easy and that I just needed to sit back and let destiny unfold! Not too long after that my career seemed to hit a roadblock, and I was pretty lost for a while. When I finally realized that I don’t deserve to be successful in music just because it’s something I’m good at, I started working harder, and smarter, than I ever had before. I made and released “In the Light” completely independently (my first independent release since my first album), and it’s my only record to have gotten Factor funding as well as make it into the iTunes charts.

I also came across your acoustic covers on YouTube (including John Lennon’s “Imagine”) which highlight your vocals with such stripped-down beauty. Who were the first vocalists to stick out to you earlier on?

Paul McCartney and John Lennon’s voices were probably the first voices I fell in love with, and I was mesmerized by the Beatles’ harmonies. I’m a 90s kid so I was a big Christina Aguilera fan growing up and spent a lot of time practicing and singing her songs. My mind was completely blown when I was about 15 and heard Mavis Staples sing for the first time in the movie The Last Waltz. Possibly my favourite voice of all time.

Currently living in England (all thanks to love!), how has the reception to your music been over there? Do you get the chance to perform at your new home?

It’s actually been here in England that I’ve been able to become a full-time musician for the first time in my life! The regional BBC radio has been really supportive of In the Light, and the reception from audiences has been great. It was like hitting the refresh button when I moved over here, and I feel like now I’m putting on better shows and have become a better entertainer. I also have a slight – ok, substantial – sense of urgency to keep moving my career forward as I get older, so I’m a lot less shy about promoting myself and hustling for gigs!

You’ve been drawn to music from the earliest days possible, but if you had to choose a different path, what would you want to do?

I wanted to be a marine biologist when I was a kid and I took a ton of math and science in high school just in case I decided to pursue it. But realistically I’d probably do something fitness related. I’m a certified gym instructor and would love to become a yoga instructor at some point in my life.