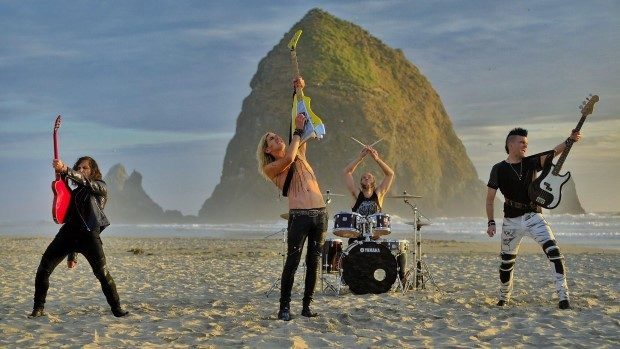 Astoria, the latest full-length album from Vancouver pop/rock group Marianas Trench was certainly one for the records. It brought the band to new heights in their live performances, included extensive touring throughout North America and venturing into the United Kingdom, charted extremely well and was overall greatly accepted by their fans. Though it did not have as many singles as the previous album, the band went out with a bang when releasing the title track as a single and video.

Marianas Trench frontman Josh Ramsay has said many times that The Goonies, a coming of age movie released in 1985, was an inspiration behind the album with its 80’s vibes and sounds, and Astoria, Oregon served as the set for the music video. You can see many of the same sights as the movie, including the infamous house that every fan of the movie would recognize instantly.

We had the chance to ask Mike Ayley a few questions about their newest video and the inspirations behind it.

What was it like being in Astoria, to be where the movie was filmed and being able to film your music video in the same settings?

It was a really interesting scenario. It truly brought the album cycle full circle. To do the last video for the album in a place that was one of the first inspirations for the music and art of Astoria was poetic in its own unique way.

What made you guys decide to turn “Astoria” into a video? How did you come up with the concept for the video?

This album, above all from Marianas Trench, had such a strong theme and story told throughout. It felt right to have one video really encapsulate as much of the album as possible and to have it be an album track that would normally not have a music video. The musical and emotional range of the song-and the extra few minutes compared to a typical single-provided the soundtrack to a video with lots of potential to be as creative as possible.

Besides the obvious settings and scenes in the music video, are there any, maybe less noticeable Easter eggs that fans could catch on to in the video that relates to the movie?

Honestly, the biggest, fattest easter egg in the whole video for me is the live performance beach scene. It looks epic on film and may have even been more breathtaking in real life. I couldn’t believe where we were shooting and how incredible it looked. In between so many takes, I was just busy looking at the ocean, beach, the crazy jagged rocks in the water and the sun slowly setting during the whole process.

Were there any other inspirations behind the music video that played a factor into the production?

The main inspiration for the video and album as a whole was the struggle and journey of going through one of the hardest times and experiences of his life, finding a way to get through it and then coming out the other side of the experience. The video is an accompaniment to that to help tell the story metaphorically. That journey really applies to the entire album but that one song sums it better than any other single track from Astoria.

Would you do any of the shots different if you had the chance?

Maybe we could have gotten one from the ocean for a different perspective on that climaxing beach scene but I have a feeling that wouldn’t have been as epic. The director, Emma Higgins, did a really good job working with Josh to capture the vision and make it look so good!