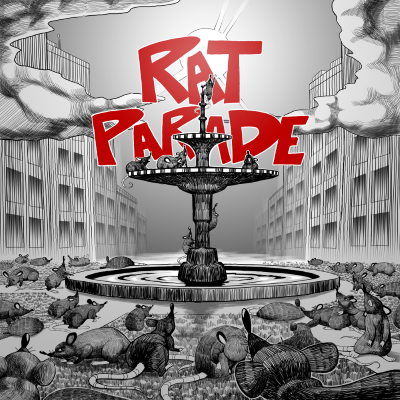 Emerging from Hamilton, Ontario is Rat Parade, a grimy garage punk band whose debut, self-titled EP harkens back to the sludgy punk rock of the 1990’s. The band is made up of lead vocalist and bassist Mitchell Theriault, guitarist and backing vocalist Ryan Theriault, and drummer Luke Grohl and will leave no doubt that punk is alive and well in Hamilton.

The album opens with “Don’t Look Down”, a punk banger with an anthem-like chorus and a loose guitar solo.  With little more than a breath, Rat Parade then launches into “Roped”, one of the record’s angrier tracks.  Ryan’s backing vocals give the album a unique touch as where most punk backing vocals are someone yelling or growling in a low register, Ryan gives the music a sense of lightness with his high and breathy vocals, which perfectly counter the rough and throaty yells of Mitchell’s lead vocals.  To give their music a reference point, Mitchell sounds most like an angrier Billy Joe Armstrong from Green Day’s earlier work.

What I appreciated most about Rat Parade is the band’s take on the punk rock genre.  While most add an obvious pop influence and many up and coming punk bands are incorporating more and more electronic textures, it is quite refreshing to find a rough, distorted, fuzzy, and low-fi punk band.  In this sense, the band resembles not only early Green Day but also the work of Rancid and other punk groups from the 1970’s scene in Los Angeles- including the Germs.  Stylistically, Rat Parade incorporates a sound that feels vintage and classic in this sense when compared to their peers.

The only downside to Rat Parade is its length; the EP only runs for about ten minutes or so.  That being said, the band plays hard, fast, and with a punk attitude and ethos for those ten minutes.  If that isn’t punk rock, then I don’t know what is.  Rat Parade show a lot of potential on their debut, making it an album for punks of all sorts to check out!