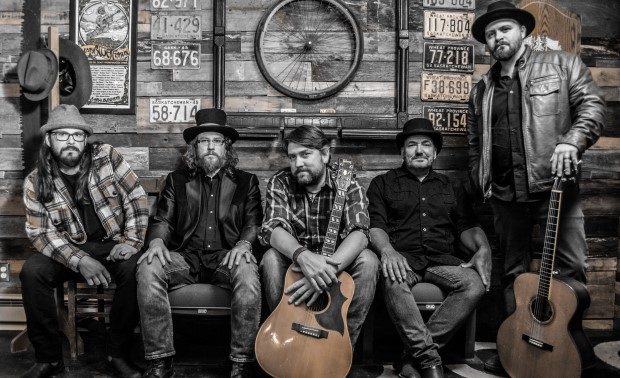 Southern Alberta based band, The Blake Reid Band have been doing the Film Festival Circuit this year with their music documentary, No Roads In, capturing multiple awards thus far. In support of the documentary, the band will hit the stage at Adelaide Hall in Toronto on November 7, so if you’re able to catch the show, you should certainly do that, but in the meantime be sure to check out the documentary trailer and Five Questions With segment below.

Hi Folks! The Blake Reid Band (BRB) is an acoustic roots country group from Southern Alberta.  We pride ourselves on being talented musicians/craftsmen with varying backgrounds in music composition and performance – and we believe our music is a reflection of the simple trials and celebrations of real life. As well, there’s a lot of personality in the BRB as we love to laugh, perform music and play jokes on each other on and off stage.

Musically, we’d fit in your playlist somewhere between Zac Brown, the Travelling Wilburys and The Allman Brothers.  I’m typically a melody writer and try to capture the emotion of the song into the melody prior to penning any lyrics.  Once I feel it, it’s easy to find the words that support the melody and idea.  The band’s individual music influences in country, jazz, and folk give a grassroots/gypsy feel to our writing.  Our acoustic instrumentation (guitar, upright bass, banjo, harmonica) gives an honest ‘backporch’ feel – but we can also dig in and get that porch rockin’ as good as anybody!

We have a number of upcoming shows of various flavours from big rocking cabaret venues, to soft seat theatres – best to check out our website blakereidband.com! Our live performances generally include sharing a few stories, a few laughs and even a few tears on occasion. Whether you’re with us on the big stage or the smaller intimate concerts we’ll always try to share and open our hearts to you.

We’ve been across the world supporting our music documentary ‘No Roads In’, about the making of our new album.  There are so many great songs that are included on the film’s soundtrack, but my favourite would be a song called ‘Penny’ – it’s got a good melody and great message.

I have so many great friends in Canadian country and roots music, but musically…hmmm.. lately I’ve been enjoying The Dead South, Great Lake Swimmers and Colter Wall.  I love the incredible variety in Canadian music – its second to no one!