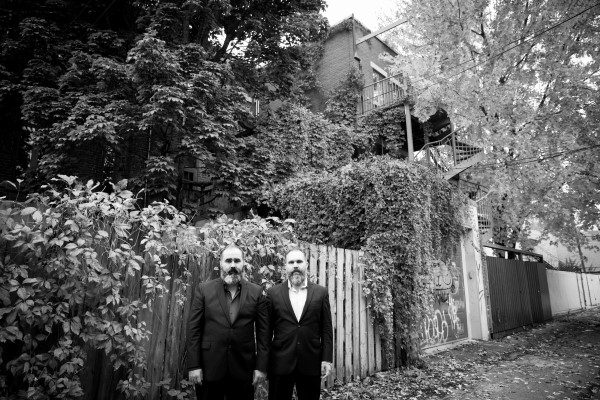 They sound retro, but also new. They’re prairie boys but have that East coast flare. They’ve got beards for days, but that clean-cut look of all the old-school greats. Add on their catchy lyrics & philanthropic spirit, The Karpinka Brothers cover pretty well everything you need to become a successful and truly Canadian band. They actually have an upcoming show on November 3 at The Local, so if you’re in the area, stop by, it goes from 5-7 pm, and you won’t regret it!

The band is almost 10 years old and now four albums in with the newest release Talk Is Cheap, but being brothers you have a whole lifetime of music memories under your belts! When you started out, was it always going to be this brother band or was one person more interested than the other?

Aaron Karpinka: Shawn had bands in high school and I would sub in if someone had partied too hard or something. We found out very quickly we could rely on each other and had similar commitment levels and musical interests.

Shawn Karpinka: I think deep down we always knew we could count on each other to play music together, and that’s why we eventually gave up on trying to come up with a cool band name and just call ourselves what we are.

“What Would I Do Without You” from the new album is an instant stick in your head hit (in the best way possible) along with plenty of others on there! When you’re writing, do you tend to approach the melodies first or nail the lyrics before anything else?

AK: I usually write a chord progression and melody first then let the lyrics fill in the blanks.

SK: Thank you so much for the kind words! That’s actually the first song I ever wrote for my brother. Often the melody comes to me first or you can also be blessed with everything arriving together.

Your sound has been grouped in with the likes of Buddy Holly, Crowded House, the Everly Brothers and even The Beatles! Who are some of your earliest musical memories?

AK: I actually used to air guitar for my family to Buddy Holly songs in the third grade. In kindergarten, I used the cut-off part of a hockey stick and nailed rubber bands to it to make my first guitar. I wanted to be like the Monkees.

SK: Learning Nirvana and Tom Petty songs are some of my early memories of the joy of playing music and following their musical path. I believe Aaron was sneaking into my room when I was out and playing my guitar and following the same path which now I think is awesome.

When talking about music memories, we have to touch on the passing of The Tragically Hip’s Gord Downie. As fellow Canadian musicians, did you feel the loss?

AK: I felt it right in my heart. I had a moment to myself a few months back where I drove from Saskatoon to Regina and played his music the whole way. I sang along. I reminisced on many memories of growing up with their music. I cried. I came to terms with the enormous loss for everyone it would be. Gord Downie certainly inspired me to pursue my dreams in music. I’m ever grateful for that, his music, the poetry of his words and his awe-inspiring magnificent energy.

SK: Our first road trip ever together was to Craven, SK to see them play at their festival, which was very musically diverse. Besides being an incredible artist and poet, he was a huge supporter of the lesser known acts he loved, and that always stuck with me.

I read somewhere that you have a history of performing at a long-term care residence at home. How did this originally come about?

AK: One of our first performances at an open stage a promoter saw us play and thought we would be a good fit for a care home here. We’ve played there over 30 times and many others and it really keeps us in touch with the real meaning of playing music.

SK: We think of the residents there more like family, and we became who we are as performers because of them.

You just wrapped up a short tour with dates from BC to NB with more dates into November including your home of Saskatoon! What’s your favourite part about playing a hometown show?

AK: I like the hometown show because it has the shortest drive to the venue. I don’t need google maps to find it. If no meal is supplied I know where to score a burger on my way home.

SK: We’ve been touring as a duo, but we also have an expanding band of amazing musicians who will be joining us for our hometown show, and we can’t wait to share the stage with them.