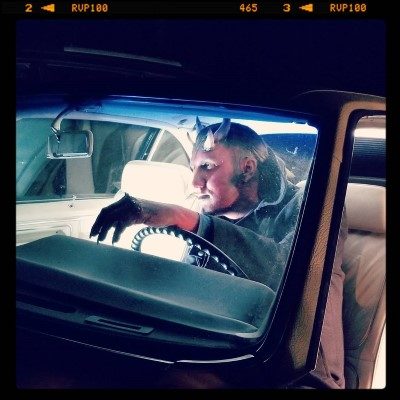 You may recognize Mikey Manville as the frontman for the rock power trio, The Manvils, but he is also quite the solo artist. His upcoming solo album, Nocturne Only is set for release digitally on November 24, but first, you get a taste of the album from the single, “Bloodthirsty” which has been released today.

When we asked Mikey about the video, he shared,

“Satan was hangin’ around in a small town, pumping gas in full makeup, checking into the motel, eating in diners, turning heads. But who knew prosthetic devil’s nails in the woods would have their drawbacks. Simple washroom breaks were a team effort. 1st AD was on zipper duty & the director helped with my belt. I drank no beer during the shoot.”

Mikey Manville will be playing his video and vinyl release show at the Cadillac Lounge in Toronto tonight (October 31), so if you’re in the area you should definitely check that out. Doors 8pm/ Show 9pm.